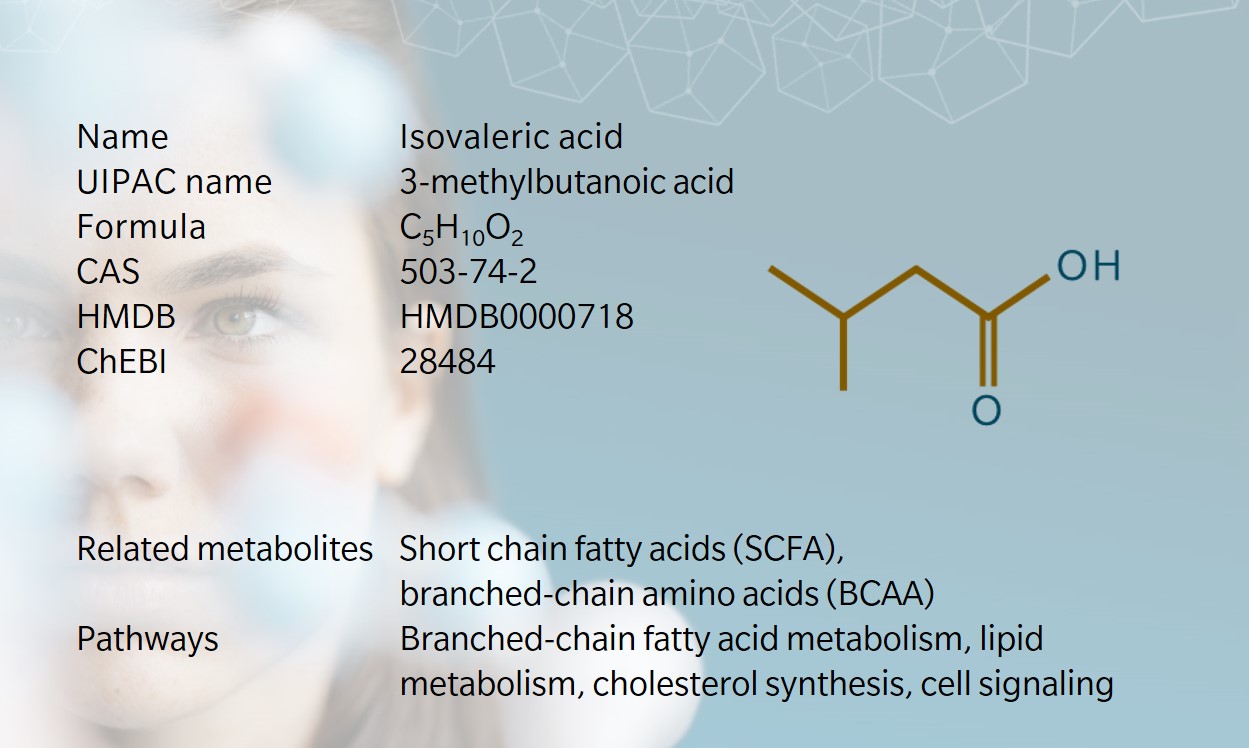 Isovaleric acid – Metabolite of the month

Isovaleric acid is one of several fatty acids discovered by Chevreul in the early 19th century (see also: butyric acid) (Dijkstra 2009). Originally named phocenic acid after its source, dolphin oil, isovaleric acid was later found in the valerian plant, and takes its contemporary name from there.

Isovaleric acid is a five-carbon branched short-chain fatty acid (BCFA). It’s an isomer of valeric acid and a conjugate of isovalerate. It smells of rancid cheese and is a common culprit of foot odor, though like butyric acid, its esters have a much more pleasant scent and are even used in perfumes (Budavari 1996, Ara et al. 2006). Traces are found in many plants, such as hops and tobacco, and in high-protein foods.

Isovaleric acid is produced in the colon by gut bacteria via fermentation of amino acids (i.e. leucine). It can also be absorbed from dietary sources. Dairy and beef products, apple juice, dry-cured meats, and fermented foods are all good sources.

It is often present in higher amounts as foods start to decay. Isovaleric acid is particularly common in beers and wines made with Brettanomyces yeasts. When beers are stored for long periods, these yeasts can ferment leucine and release isovaleric acid (Silva Ferreira et al. 2019).

While the major short-chain fatty acids (SCFAs) are released in the colon when gut bacteria ferment indigestible carbohydrates, BCFAs are produced in smaller amounts during the fermentation of proteins. For this reason, they may be seen as markers of protein fermentation (Ríos-Covián et al. 2020). High protein diets have been linked to higher concentrations of BCFAs (Aguirre et al. 2016).

Isovaleric acid is the product of leucine fermentation (Blakeney et al. 2019). The other branched-chain amino acids (BCAAs), valine and isoleucine, break down into the BCFAs isobutyric acid, 2-methylbutyric acid respectively.

Isovaleric acid and the microbiome

The behavior of gut microbiota during isovaleric acid production seems to be influenced by availability of amino acids, diet, metabolism, and microbiotic composition (Ríos-Covián et al. 2020).

Straight-chain SCFAs and their role in human health have been more widely studied than isovaleric acid and the other BCFAs. In vitro studies show that BCFAs can protect against cancer, inflammation, and various metabolic disorders, though to date there haven’t been many human studies (Taormina et al. 2020).

As noted, BCFAs are the products of BCAA degradation. They are usually one carbon shorter than their BCAA precursors, following oxidative decarboxylation from the keto acids to isoacids (Becht 1987). Intestinal amino-fermenting microbiota include Clostridium (Smith et. al. 1998) and Bacteroides (Aguirre et al. 2016) .

Another study of gut contents in recently deceased individuals showed that BCFA production was higher in the distal colon compared to the proximal colon (Macfarlane et al. 1992), revealing that amino acid fermentation increases as food progresses in the colon. Given that most diseases of the large intestine occur in the distal colon (Macfarlane et al. 1991), this suggests a relevance of amino acid fermentation for a broad array of gastrointestinal diseases (as reviewed by Macfarlane et al. 2012).

SCFAs are known to affect digestive health and may even act as potential biomarkers for bowel disease. Evidence is less robust for the BCFA subset. A case-control study compared the amount of SCFAs in feces in individuals with and without irritable bowel syndrome (IBS). Although there were statistically significant differences in fecal SCFA levels between the two groups overall, and particularly for butyric acid, isovaleric acid on its own did not appear to be a robust diagnostic tool (Farup et al. 2016).

However, one animal study showed that isovaleric acid activates protein kinase A (PKA) signaling in the colon, resulting in the relaxation of smooth colon muscle cells. This indicates that BCFAs do play some role in colonic health and motility (Blakeney et al. 2019).

The gut-brain axis is of growing interest in neurology. Concentration of BCFAs in the gut have been linked to depression and anorexia nervosa (Szczesniak 2016, Mack 2016). Microbiota are thought to influence depression through inflammation, the hypothalamic-pituitary-adrenal (HPA) axis, and neurotransmitters (Foster et al. 2013).

This appears to confirm the influence of isovaleric acid and rule out significant lifestyle effects. The fact that creatine can be used to block isovaleric acid also suggests that isovaleric acid interferes with neurotransmission in the brain. Further studies might look at how dietary leucine affects this process (Szczesniak et al. 2016).

Too much isovaleric acid in the blood is a sign of isovaleric acidemia, a rare, inherited metabolic disorder that can cause acidosis, vomiting, lethargy and a strong body odor, which usually presents soon after birth or in early childhood (Vockley et al. 2006). It is caused by a deficiency in the mitochondrial enzyme isovaleryl-CoA dehydrogenase (IVD), which helps break down isovaleric acid.

Without enough IVD, isovaleric acid builds up in the blood, preventing leucine metabolism. This is usually detected using mass spectometry. It can be treated with a low-protein diet, and carnitine and glycine supplements.

More on SCFAs and MCFAs