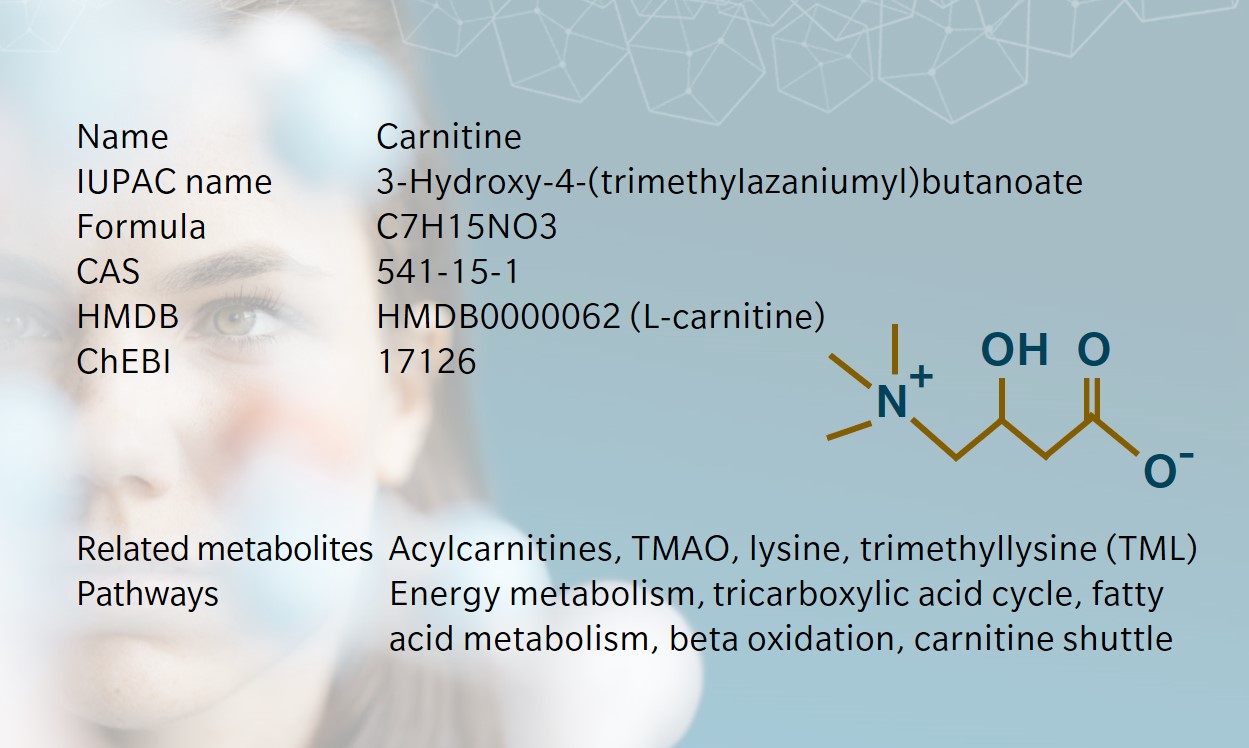 Metabolite of the month – Carnitine

Discovered in meat extracts, carnitine takes its name from the latin carnis meaning meat or flesh. The role of carnitine in metabolism was originally described in insects where it was found to be an essential nutrient for certain species. In many species, including mammals, carnitine is crucial in the use of fatty acids as an energy source (Wolf 2006).

Carnitine has a highly conserved biosynthetic pathway. The enantiomer L-carnitine is the active form found in humans and other life forms. D-carnitine does not occur naturally.

It is estimated that only a quarter of our carnitine pool is supplied by de novo carnitine synthesis, which primarily takes place in the liver and kidneys. The remainder is absorbed from our diet (Longo et al. 2016).

In humans, L-carnitine is primarily produced from trimethyllysine (TML), a product of the degradation of protein-incorporated lysine. Gamma-butyrobetaine dioxygenase (BBOX) is a key enzyme in the carnitine synthesis pathway, and it catalyzes the last and stereospecific step in the pathway. Carnitine synthesis requires several co-factors including vitamins B3 (niacin), B6 (pyridoxal phosphate), C (ascorbic acid), iron and zinc.

Diet can be a copious source of L-carnitine, especially if rich in red meats, fish and dairy products. Diets that exclude meat and/or other animal products result in a reduction in circulating carnitine levels and have also been linked to a reduced capacity to transport carnitine into muscle tissue (Stephens et al. 2011). However, it has been suggested that a vegetarian/vegan diet can be a rich source of the carnitine precursor TML (Servillo et al. 2014).

Carnitine is primarily described as a key player in the degradation of long chain fatty acids (LCFAs) in the mitochondria via the carnitine shuttle system. In order to enter beta oxidation, LCFAs must first be transported through the inner mitochondrial membrane. This is achieved by the carnitine-acylcarnitine translocase (CACT), which transports their carnitine-bound form (acylcarnitine). Once in the mitochondrial matrix, the acyl group of the acylcarnitine is cleaved, and can enter beta oxidation. The final metabolite of beta-oxidation is acetyl-CoA, which can enter the tricarboxylic acid cycle for ATP production.

Free from the acyl group, carnitine can be transported back out of the matrix by CACT and re-used for LCFA shuttling. The same shuttling system can also export excess acetylcarnitine out of the mitochondria to limit inhibition of pyruvate dehydrogenase and spare the pool of free CoA necessary for other molecules.

Acylcarnitines and their roles

The short-chain acylcarnitine acetylcarnitine (C2) is of particular importance in energy metabolism, as it is closely related to acetyl-CoA (Constantin-Teodosiu et al. 1991). The latter is the metabolic crossroads where the products of fatty acid beta oxidation and glucose metabolism through glycolysis can enter the tricarboxylic acid cycle (or Krebs cycle). Increasing levels of acetyl-CoA through either pathway has the potential to strongly deplete the levels of CoA needed in the mitochondrial matrix for beta oxidation of fatty acids. The carnitine shuttle system described above acts as a buffer for excess mitochondrial acetyl-CoA by transporting the acetyl group into the cytosol while releasing the CoA group in the mitochondrial matrix.

Carnitine molecules that are not absorbed can either be excreted or be metabolized by intestinal microbiota (Ghonimy et al. 2018). Bacteria of the Pseudomonas species utilize carnitine as a source of carbon and nitrogen, while Acinetobacter make use of the carbon backbone only and release trimethylamine (TMA) as an end product. Many studies have shown a link between the risk of cardiovascular diseases and the production of TMA by intestinal bacteria, which is further converted to trimethylamine N-oxide (TMAO) by hepatic enzymes (Tang et al. 2019).

Carnitine as a food supplement

L-carnitine came to fame as a food supplement for its claim to “turn fat into energy”. As a result, it has been commonly used both for weight loss (Pooyandjoo et al. 2016) and bodybuilding and athletic performance enhancement (Karlic and Lohninger 2004). Although carnitine is indeed taken up in the intestine, research has shown that a large proportion of L-carnitine supplements is directly excreted or quickly cleared by the kidneys in the urine. In addition, uptake is rarely linked to an increase in carnitine content in muscular tissue. Research has shown that insulin or a high carbohydrate diet could raise the levels of carnitine in muscle tissue during exercise after supplementation for several weeks (Wall et al. 2011), which constitutes a higher burden than simply taking a supplement pill. In addition, long term effects of such a diet would have to be checked before recommending it for any application.

Clinical applications of carnitine and its metabolites

Acylcarnitines have been used for decades in early diagnosis of several inherited metabolic disorders in newborn babies. This newborn screening (NBS) uses absolute measurements and ratios of acylcarnitine levels in dried bloodspots to identify conditions that result in an imbalance in (acyl)carnitine blood levels. Several inherited disorders related to carnitine biosynthesis and transport are commonly included in such screening strategies. Find out more on the contents of these tests in the USA and Europe (Bodamer et al. 2007).

Short chain acylcarnitines have attracted a lot of attention in the context of diabetes and insulin resistance, with acetylcarnitine playing again a central role as a master regulator of energy metabolism strategies. Malonylcarnitine (C4-OH) has also been suggested as a metabolite of interest in the context of insulin resistance and strategies to manage lipid metabolism (Schooneman et al. 2013). An intra- and inter-individual metabolic profiling study recently identified carnitine metabolites as key molecular players in type 2 diabetes (Diamanti et al. 2019).

Several rare diseases resulting in low levels of carnitine production and/or uptake have been shown to greatly benefit from carnitine supplementation that can help reach a physiological carnitine pool and restore related functions in energy metabolism.

For example, patients with systemic primary carnitine deficiency (SPCD) have a deficiency in carnitine due to a mutation in the plasma membrane sodium-dependent high affinity carnitine transporter (OCTN2) that enables cellular carnitine uptake in the heart, muscle, and kidney. This results in a lack of energy production from fatty acids, which causes symptoms ranging from tiredness and hypoglycemia (glucose being used extensively as an energy source) to accumulation of fat in the liver and other organs, and damage to heart and muscle tissues. Supplementation with high levels of L-carnitine (100-400 mg/kg/day) alleviates most symptoms.

Similarly, in patients with carnitine-acylcarnitine translocase deficiency (CACTD), the carnitine shuttle system does not function and LCFAs cannot be transported inside the mitochondrial matrix for beta oxidation. This results in a life-threatening disorder characterized by hypoketotic hypoglycemia, dysfunctions of the heart, muscle and liver and encephalopathy. Here diet is an essential management strategy and fasting is strictly avoided to guarantee a sufficient glucose pool for energy metabolism. Carnitine supplements can also help patients with CACTD although they do not address all symptoms.