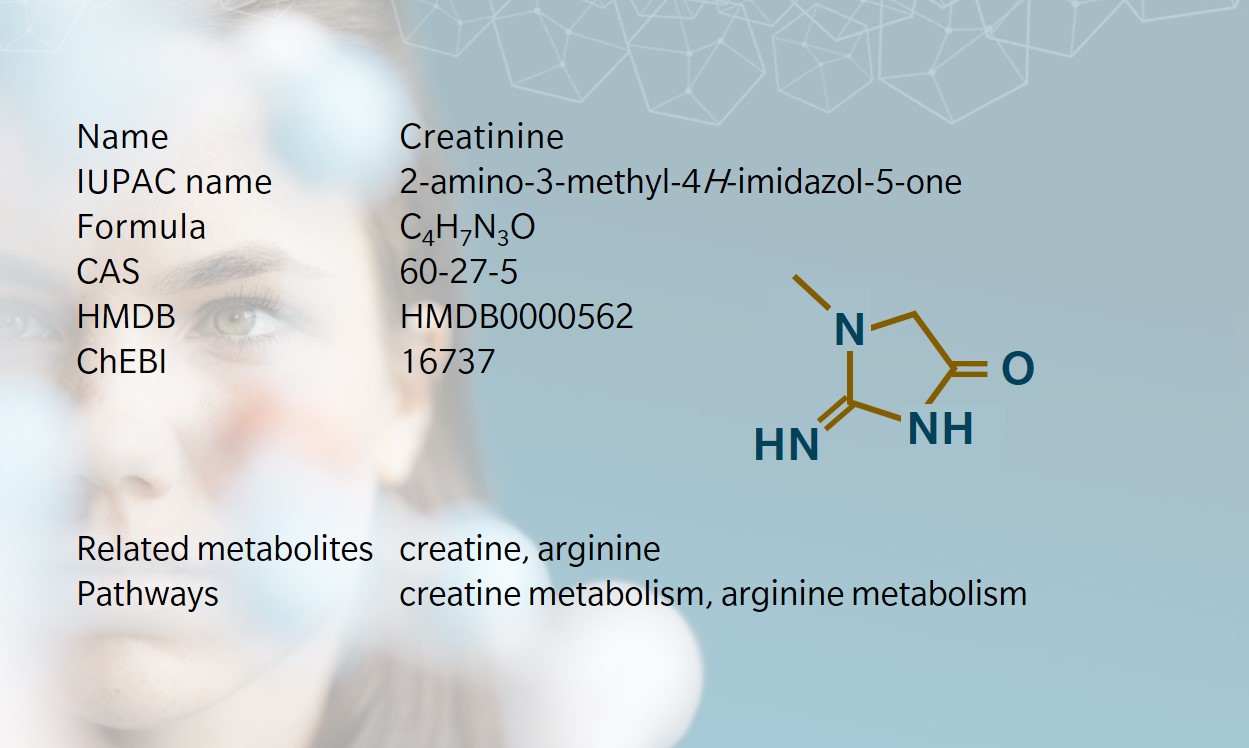 Metabolite of the Month – Creatinine

Creatinine is a non-protein nitrogenous waste product generated during energy breakdown in muscles. It is found in plasma, serum and urine (Washington and Van Hoosier et al. 2012). A product of creatine and phosphocreatine breakdown (Burke et al. 1999), it can similarly act as a measure of kidney function (Maynard 1997).

In humans, creatinine is formed primarily in muscle tissue from the precursor creatine, and released in the circulation before being cleared by the kidneys. However, diet is a strong influencer of the overall creatinine concentration in the body. Cooked red meat is a great source of creatinine (Hosten 1990) due to the transformation of creatine into creatinine during the heating process. Thus, individuals with a diet rich in red meat or other protein sources tend to have higher creatinine levels than those who eat less protein (Samra and Abcar 2012). Dietary creatinine has also been found to be the substrate of several bacterial strains able to degrade creatinine in human stool samples. These strains include Pseudomonas eisenbergii, ovalis and Clostridium welchii (Ten Krooden and Owens 1975). Most circulating creatinine is filtered by the kidneys and excreted from the body through urine, although up to 34% of creatinine is degraded in the gut, in a process referred to as non-renal clearance (Huang et al. 1982).

Creatinine is perhaps best known to clinicians and biologists as an indicator of renal function and as the go-to molecule to perform normalization in urine samples. Removed from the blood by glomerular filtration in the kidneys, and only moderately secreted back into the circulation in the nephron (Shemesh et al. 1986), creatinine remains one of the best known candidate molecules to calculate the glomerular filtration rate (GFR). GFR is measured by combining serum and urine creatinine levels, while estimated GFR calculations are based on serum measurements only (Deray et al 1987).

While creatinine-based estimates can be influenced by factors such as age and diet, the ease of measurement of creatinine in biofluids remains an advantage compared to more exact methods requiring, for instance, long and tedious infusions of inulin for the patient (Diskin 2007). The normal circulating concentration of creatinine is considered to be around 1 mg/dL in healthy adults, with similar variation ranges between females and males. Creatinine is excreted in the urine at a rate of about 88-128 mL/minute in females, and about 97-137 mL/minute in males (Hosten 1990). Excretion and GFR are however strongly influenced by age, with serum creatinine progressively decreasing, while GFR increases, mirroring a progressive and irreversible decline in renal function (Jones and Burnett 1974).

Another link between creatinine and renal physiology is the use of the serum levels of the enzyme creatine kinase as an indicator skeletal muscle damage from strenuous exercise or rhabdomyolysis, a condition where skeletal muscle is degraded. Such situations can lead to a large strain on the kidneys for the elimination of muscle breakdown products and possibly to renal failure (Clarkson et al. 2006).

Creatine, the precursor of creatinine with a dreadfully similar name, is a product of arginine metabolism via the combination of arginine and glycine in the kidneys, small intestine or pancreas, followed by methylation in the liver. Around 90% of the creatine released by the liver in the circulation is absorbed and stored in muscles as phosphocreatine. It is estimated that about 2% of these stores are consumed daily to form creatinine (Brosnan et al. 2011; Dossetor 1966; Hosten 1990).

Several rare diseases grouped under the name “cerebral creatine deficiency syndromes” share severe neurological and developmental symptoms, and a reduction of creatine levels either from impaired creatine transport into the muscle and brain, or from an incapacity to synthetize creatine from arginine (Schulze 2003). Impaired creatine synthesis is a major impediment in muscle and brain development as it diminishes the activity of the enzyme creatine kinase, which not only catalyses the inter-conversion of phosphocreatine and creatine, but can also produce a molecule of much needed ATP in the process. Creatine has even been suggested as a potential treatment against cognitive decline and has shown some success to improve short-term memory and reasoning in healthy volunteers (Avgerinos et al. 2018).

High circulating levels of creatine kinase are also used in the diagnosis of myocardial infarction (Fan et al. 2017). In hypertensive individuals, high levels of serum creatinine are associated with higher mortality rates (Shulman et al. 1989). Similarly, risk of stroke increases as the concentration of serum creatinine rises. These elevated levels are often the only predictor of all-cause and overall cardiovascular disease deaths (Friedman 1991; Matts et al. 1993), though they do not seem to be associated with cancer and other non-cardiovascular deaths (Wannamethee et al. 1997).

Research on creatinine has provided original applications based on the relative stability of this metabolite in blood and urine under homeostatic conditions. As creatinine is primarily viewed as a product of muscular degradation, a decrease in creatinine levels is thought to reflect a reduction in lean body mass, or muscle mass, available for creatinine synthesis. This concept has been used to study the effects of malnutrition in children and adults (Hari et al. 2007). In addition, creatinine-based indicators were developed, such as the creatinine height index (CHI) (Walser 1987). The CHI uses the daily urinary creatinine excretion of patients and compares them to those of other individuals of the same height and sex (Viteri and Alvarado 1970). A variation on this theme is the creatinine arm index suggested by Van Hoeyweghen et al. (1992) with the same principle adapted to reduce the influence of age on the results.

Explore other Metabolites of the Month
Back to HOME