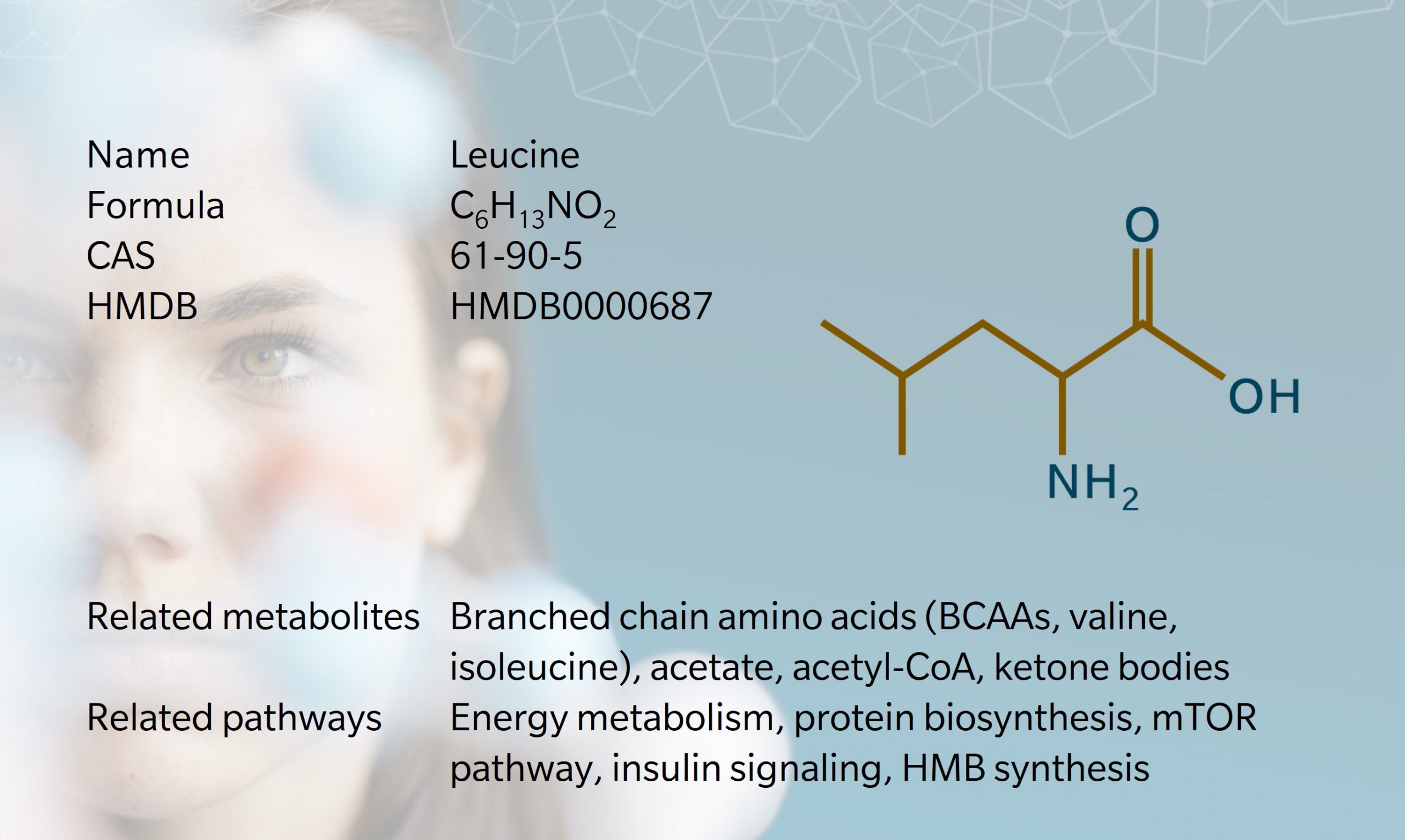 Leucine – Metabolite of the month

One of the first amino acids to be discovered, leucine was first obtained from cheese in 1819, by French chemist, Proust (Wu 2013). In 1820, Braconnot used acid hydrolysis to isolate leucine from skeletal muscle and wool, and gave the substance its name.

Its structure wasn’t identified until 1891, when Schulze synthesized leucine from isovaleraldehyde. Leucine is an isomer of isoleucine, which was first identified as essential for optimal growth in humans in 1935 (McCoy et al. 1974).

Leucine is the most abundant branched chain amino acid (BCAA) found in animal and plant proteins. It plays an important role in protein synthesis and metabolic function, and is sometimes used as a dietary supplement or flavor enhancer.

As one of nine essential amino acids, leucine is not biosynthesized by animals and humans and therefore must be obtained through food. In plants and microorganisms, leucine is synthesized from pyruvic acid.

Major dietary sources of leucine include high-protein animal products, dairy products, eggs, pulses and whole grains. Because the three BCAAs (leucine, valine and isoleucine) are typically consumed together, they tend to be studied as a group, though there are important differences in their synthesis and functions (Neinast et al. 2019).

Leucine is transported around the body in the blood and incorporated into new proteins or oxidized in tissues. It helps regulate blood-sugar levels, stimulates muscle protein synthesis, and promotes growth of muscle and bone tissues. The amount of leucine in the blood increases shortly after consumption of protein-rich food, then returns to fasting levels.

After leucine is ingested, it is utilized in many organs including the liver, skeletal muscle, adipose tissue, and gut (Ananieva et al. 2016). Leucine is mostly converted to acetyl coenzyme-A (CoA) in a series of reactions taking place in the cytosol and in the mitochondria (Surayawan et al. 1998). To a lesser extent, leucine is also converted into β-hydroxy β-methylbutyric acid (HMB), a precursor of ketone bodies and of cholesterol (Duan et al. 2015).

BCAA metabolism is well-studied. Besides serving as a building block of proteins, leucine can be metabolized into the ketone body acetate. Leucine is one of only two exclusively ketogenic amino acids (along with lysine), which means that it catabolizes to acetyl-CoA, but not glucose (Brody 1999).

The other two BCAAs can also be converted to precursors in energy metabolism: isoleucine turns into propionyl-CoA and acetyl-CoA, and valine converts into succinyl-CoA. Thus, all BCAAs can fuel the tricarboxylic acid (TCA) cycle, or Krebs cycle, one of the main sources of energy for cells (Neinast et al. 2019).

While leucine is exclusively ketogenic, valine is exclusively glucogenic, and isoleucine can follow both routes. Glucogenic amino acids typically work as glucose precursors by providing late intermediates of the TCA cycle that enter gluconeogenesis rather than a full TCA cycle.

Too much leucine (or other amino acids) can lead to hyperactivation of mTORC1, which can cause insulin resistance and impair glucose metabolism (Wishart 2019). This can happen as a result of obesity or a very high protein diet (Melnik 2012).

The high hydrophobicity of leucine gives it unique properties exploited in protein folding. Leucin-rich repeats (LRR) are structural motifs made of multiple repeats of 20 to 30 leucines that arrange into a horseshoe shape with a hydrophobic core. LRRs are present in proteins with unrelated functions and implicated in various diseases.

For example, mutations of the protein leucine-rich repeat kinase 2 (LRRK2) have been associated with late-onset Parkinson’s disease, which may have therapeutic implications in future (Funk et al. 2019).

Leucine-zippers are another protein structure relying on the hydrophobicity of leucine. Here, the 3D structure of the alpha helix makes leucine residues meet every 7 amino acids, resulting in a zipper-like structure that reinforces protein-protein interactions.

This is used for dimerization of DNA-binding proteins such as transcription factors that form robust protein-protein interactions via their (basic leucine zipper) bZIP domains (Deppmann et al. 2006).

As a regulator of mTOR, leucine has also been studied as a potential dietary supplement to help regulate food intake and energy metabolism (Pedroso et al. 2015).

It is unclear if leucine helps weight management through reduced food intake or if this is a consequence of individuals becoming more engaged in other health behaviors at the same time as introducing supplements. However, evidence suggests that it does reduce adiposity and help control glucose levels.

There is a risk of adverse effects with leucine supplementation in obese and diabetic individuals: in both animal and human studies, high-fat diets combined with BCAA supplementation led to higher levels of leucine in the blood, and increased insulin resistance (Elango et al. 2016). Excess leucine may also increase oxidative stress.

Leucine as a supplement

Recent studies suggest a daily intake of around 40mg/kg bodyweight per day would be optimal for adults, with higher doses recommended for individuals who participate in intensive physical activity (Kurpad et al. 2006).

Although leucine is widely available in foods and deficiency is rare, supplementation may be recommended to increase muscle mass or prevent protein degradation in muscle wasting conditions. Because of leucine’s role in building and repairing muscle tissue, it is of particular interest to athletes and is sometimes used to promote recovery, though evidence of its efficacy is mixed.

Leucine supplementation is sometimes encouraged in older people to mitigate the effects of sarcopenia, which is the age-related loss of lean muscle mass.

Research shows that leucine supplementation may improve muscle strength and function in older people (Ispoglou et al. 2016), and while evidence on the optimal dose is unclear, international guidelines have recommended 3g of leucine with 25–30g of protein at three main meals per day (Deutz et al. 2014).

Other research suggests that a mixture of amino acids may be more effective than leucine alone to promote muscle building in older people (Balage et al. 2010).

Leucine has also been investigated as a potential therapy for atherosclerosis, Parkinson’s disease, cirrhosis, and the physical effects of eating disorders (Polis et al. 2020).

Metabolomic studies have linked impaired BCAA metabolism to the development of neurological conditions such as Alzheimer’s disease (AD). BCAA are regularly identified among the metabolites that associate with AD or AD risk, although the role of leucine specifically remains inconclusive (Polis et al. 2020, Larsson et al. 2017). Studies have shown that a mixed BCAA therapy helped to improve cognitive recovery in patients with severe traumatic brain injury such as stroke (Aquilani et al. 2005).

Studies also show a link between amino acid metabolism and autoimmune disorders such as multiple sclerosis (MS). When immune cells are affected by inflammation, they need more amino acids to promote cell repair.

One study observed lower levels of leucine catabolism (and of other amino acids) in the immune cells of patients with MS (Negrotto et al. 2017). In addition, there appears to be an inverse association between leucine intake and depression and anxiety (Koochakpoor et al. 2021).

One specific condition related to amino acid metabolism is maple syrup urine disease (MSUD), which affects newborn babies (Neinast et al. 2019). This is an amino acid acidopathy caused by a mutation of branched chain α-keto acid dehydrogenase (BCKDH), which causes leucine and the other BCAAs to build up in the blood and urine.

It gets its name from the sweet odor it gives the urine. It can cause vomiting, lethargy and seizures, and if left untreated, can cause neurological issues. It is treated with a strict low-BCAA low-protein diet. Supplementation with L-carnitine has also shown potential to reduce inflammation and oxidative stress in MSUD patients (Mescka et al. 2015).

Explore more Metabolites of the month