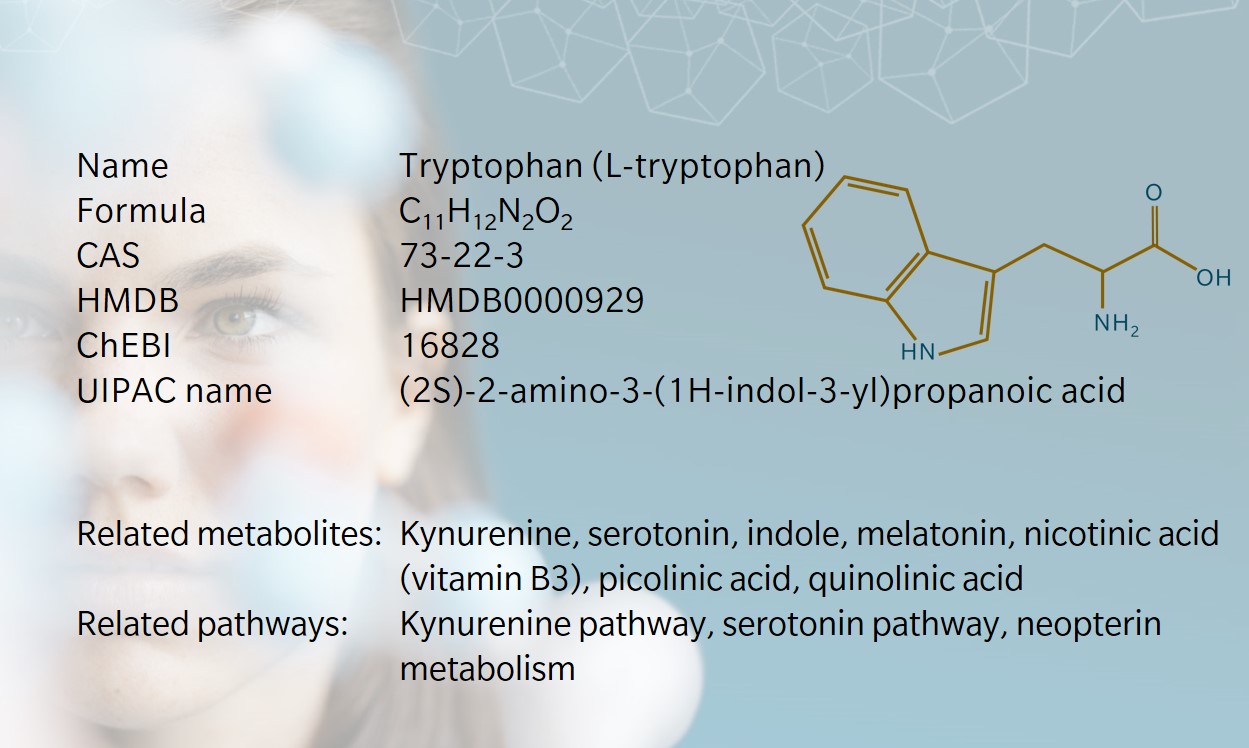 Metabolite of the month – Tryptophan

Tryptophan (or L-tryptophan) was discovered in 1901 by Hopkins and Cole, who isolated it from milk-derived casein (Hopkins et al. 1901). On first spotting an anomalous color reaction when studying acetic acid, Hopkins was said to have danced a jig and exclaimed, “I have a feeling that if we can find the meaning of a color reaction like that, it may open up a way to new knowledge of the structure of the old protein molecule itself,” (Dale 1948). And he was right: the discovery of tryptophan opened the door to understanding the presence and role of essential amino acids, which form the building blocks of proteins.

A few years later, Ellinger and Flamand reported the first synthesis of tryptophan and identified its structure (Ellinger et al. 1908). Tryptophan was subsequently identified as a precursor to serotonin, melatonin and niacin.

In the 1980s, tryptophan became available as a nutritional supplement because of its role as a precursor to the mood-stabilizing neurotransmitter serotonin. In 1988, tryptophan supplements manufactured using genetically engineered bacterial fermentation were linked to an outbreak of eosinophilia myalgia syndrome (EMS), leading to the supplements being banned by the US Food and Drug Administration between 1989 and 2005 (Allen, J. et al, 2011). Numerous clinical trials have shown no further links between tryptophan supplements and EMS.

Tryptophan has been found beneath the ocean floor, suggesting abiotic formation (Urquhart 2018). Some suggest that this discovery could reveal information about the role of amino acids in early-stage biological life. However, others note that tryptophan’s larger and softer structure indicates later evolution than other amino acids.

As an essential amino acid, tryptophan cannot be synthesized within the body. It’s obtained from dietary sources including dairy products, meat and seeds. Some say the tryptophan in turkey triggers the melatonin production that causes people to feel sleepy after a big Christmas or Thanksgiving dinner. In reality, there’s no more tryptophan in turkey than in other meats.

The recommended daily allowance for most adults is around 250–425mg per day, and most people easily exceed this (Richard et al. 2009). Relatively low amounts of tryptophan are stored in tissues, but this isn’t an issue given the amount typically consumed.

Tryptophan, the microbiome, and host metabolism

Catabolism of tryptophan occurs primarily in the gut, triggering the indole, kynurenine and serotonin pathways (Taleb, 2019).

Most tryptophan is transformed in the indole pathway. Intestinal bacteria express the enzyme tryptophanase, leading to the production of indole in the gut. This is metabolized into 3-indolepropionic acid (IPA) which binds to the pregnane X receptor (PXR) in intestinal cells. IPA is absorbed in the intestine and distributed to the brain, where it is associated with neuroprotective properties. Indole can also be metabolized into indole-3-aldehyde (I3A) which triggers immunoprotective effects in the intestine. In the liver, indole may be metabolized into indoxyl sulfate, which can be toxic in high concentrations.

As the rarest of three aromatic amino acids, tryptophan is the only amino acid with a non-polar indole ring. This is used for signaling and helps it to anchor membrane proteins within the cell membrane. Indole is a precursor of metabolites that, as noted, can have both positive and negative effects on the host organism.

A small amount of dietary tryptophan is metabolized by tryptophan hydroxylase in the serotonin pathway. Around 95% of the serotonin is found in the gastrointestinal tract (GIT), with a small concentration in the brain (Richard et al. 2009). In the GIT, serotonin acts as an enterosyne, signaling to the enteric nervous system (ENS) and contributing to the gut-brain axis. In the brain, besides its role as a neurotransmitter, serotonin is a precursor of melatonin in the pineal gland.

As a precursor to kynurenine, tryptophan plays a large role in regulating the immune system. Kynurenine and its metabolites are of increasing interest to the study of autoimmune and immune-mediated diseases, such as multiple sclerosis and rheumatoid arthritis.

Metabolomic analysis in both animal and human subjects showed that the kynurenine-tryptophan ratio correlated with levels of inflammatory cytokines that could induce IDO activation (Westbrook et al. 2020). The study suggests that tryptophan metabolism and kynurenine metabolite activity are the molecular mechanism that connects chronic inflammation with frailty and other signs of ageing.

Metabolomics has been used to investigate the role of tryptophan metabolites in gut dysbiosis, which increases susceptibility to liver inflammation (Krishnan et al. 2018).

While tryptophan supplementation is not recommended for the general population, these studies suggest potential use as a treatment for specific conditions.

Tryptophan, serotonin and the gut-brain axis

On a recent episode of The Metabolomist podcast, Dr Jennifer Kirwan, Head of Metabolomics at the Berlin Institute of Health, shared why tryptophan is her favorite metabolite:

“Tryptophan acts as a direct link between nutrition, the gut microbiome and human health. We’re only just beginning to understand all the roles that tryptophan and its metabolites have in the body… Although we think of serotonin as a neurotransmitter, it actually has a fairly important effect on gut motility. There’s increasing interest in how the gut and brain talk to each other. We don’t yet know the full role of tryptophan and its metabolites in this gut-brain axis, and how it’s impacting our health.”

Serotonin was long thought to be important only in the brain, but as noted by Kirwan, it plays a role throughout the body. It’s a key neurotransmitter at both ends of the gut-brain axis – the central nervous system and the gastrointestinal tract (O’Mahony et al. 2015).

Serotonin is sometimes referred to as the “happy hormone,” as low levels can result in low mood, poor sleep and depression. Research has shown that therapeutic targeting of gut microbiota may improve gut-brain axis disorders (Carpenter 2012). Gut microbiota appear to influence serotonergic signaling in the central nervous system, and alterations in the gut microbiome appear to overlap with changes in serotonergic signaling (O’Mahony et al. 2015).

However, there are mixed views on this subject. Serotonin produced in the gut does not cross the blood-brain barrier: it’s the serotonin synthesized from dietary tryptophan in brain cells that influences mood, depression and anxiety (Bektas et al. 2020). The main mediator of these effects would therefore be the serotonin-modulated ENS, rather than circulating serotonin.

Clinical trials on neurological and psychiatric disorders focus on increasing or reducing tryptophan levels, through supplementation or deprivation. A systematic review and meta-analysis of thirteen studies found a positive correlation between probiotics and kynurenine pathway metabolism, but limited evidence of an effect from prebiotics (Purton et al. 2021).

Tryptophan has been shown to be a useful diagnostic marker for some cancers. For example, tryptophan fluorescence has been used to assess colonic neoplasms, while amino acid profiling and combined serum histidine and plasma tryptophan have been shown to facilitate the diagnosis of renal carcinoma (Friedman 2018).

Tryptophan metabolism has also been associated with tumor cell malignancy and restriction of antitumor immunity, though clinical trials targeting the tryptophan-kynurenine-aryl hydrocarbon receptor (AhR) axis with immunotherapy have been inconclusive (Peyraud et al. 2022).

Drug development in oncology mostly focuses on inhibiting enzymatic activity in the kynurenine pathway, for example, with IDO1 and TDO inhibitors.