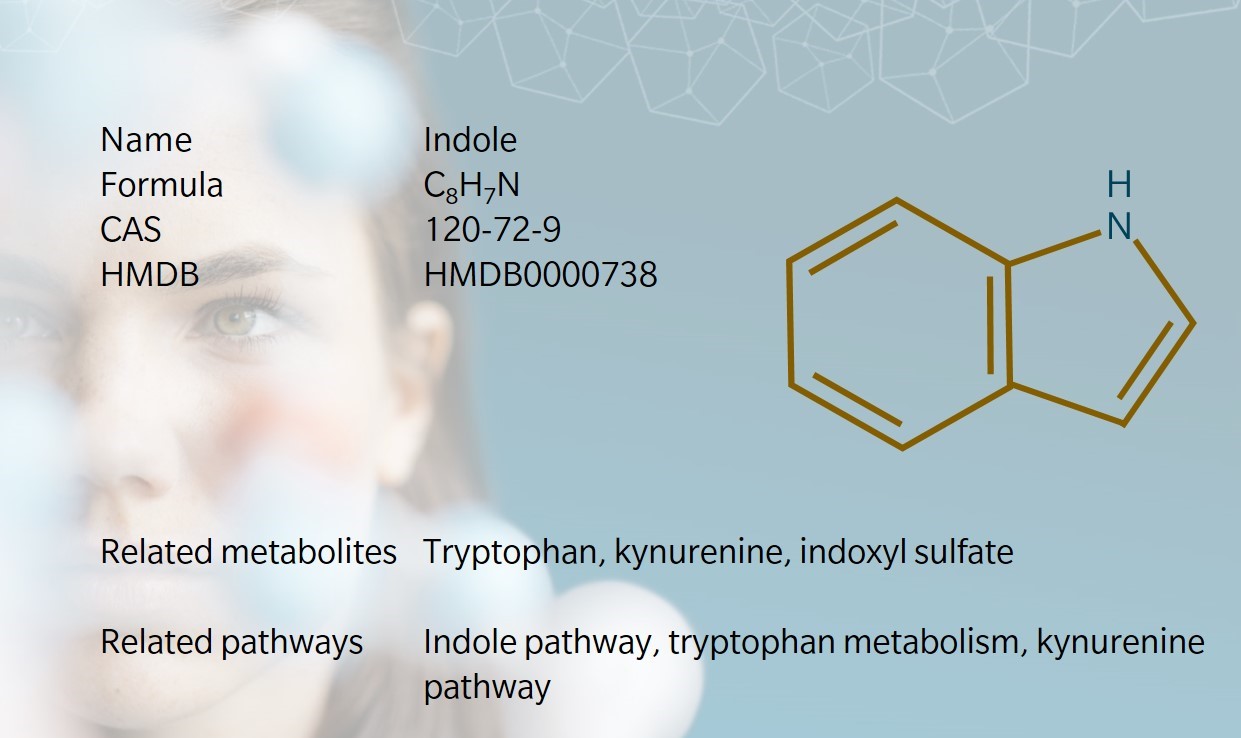 Metabolite of the month – Indole

Indole was first discovered during the process of making dyes with indigo in the mid-nineteenth century. German chemist Adolf von Baeyer first isolated indole through a reaction of indigo, sulfuric acid and sulfuric anhydride (Gribble 2016). The metabolite gets its name from the words “indigo” and “oleum,” because it was the product of treating indigo dye with oleum.

Indole is the main metabolite produced by gut bacteria during tryptophan metabolism (Jaglin et al. 2018), and is a precursor of metabolites that can be both beneficial and harmful for the host. Indoles, also known as benzopyrroles, are heterocyclic compounds found widely in nature. They have a double-ring structure, with one benzene and one pyrrole ring. This structure is of great interest in medicinal chemistry, as it can be used as a scaffold for new drugs, including treatments for cancer, liver disease, diabetes, hypertension, inflammation, and depression (Kaushik et al. 2013, Dorababu 2020).

Solid at room temperature, indole has a pungent odor, commonly associated with the smell of feces and coal tar. Interestingly, it has a pleasant floral odor in very small concentrations, which makes it a perfect ingredient for perfumes and even a flavor enhancer in chocolate.

Indole is also found in plant-based psychedelic drugs including psilocybin and dimethyltryptamine.

In humans, indole is synthesized in the intestine as a product of tryptophan metabolism. Tryptophan, one of the nine essential amino acids, cannot be synthesized by humans, and is therefore primarily obtained through dietary sources, particularly cruciferous vegetables, dairy and meat products (Hubbard et al. 2015, Friedman 2018). Tryptophan is mostly absorbed in the small intestine and liver, but any that reaches the colon can be catabolized to indole derivatives, such as indoleamine 2,3-dioxygenase 1 (IDO1), which generates indole metabolites and alters gut function.

Indole and the microbiome

Gut bacteria activate ingested tryptophan to trigger three main catabolic pathways, including the indole pathway, the kynurenine pathway and the serotonin pathway (Taleb 2019). Due to the different catabolic enzymes present in different bacteria, a variety of tryptophan catabolites are produced, including indole (Hendrikx & Schnabi, 2019). For example, Clostridium sporogenes metabolizes tryptophan to release the enzyme tryptophanase (Roager et al. 2018). This produces 3-indolepropionic acid (3-IPA), which binds to the pregnane X receptor (PXR) in intestinal cells. Once absorbed into the bloodstream, IPA is distributed around the body.

Another pathway involves Lactobacillus, which metabolizes tryptophan into indole-3-aldehyde (I3A). This activates the aryl hydrocarbon receptor (AhR) in intestinal immune cells, which in turn triggers the production of the immuno-protective cytokine, interleukin-22 (IL-22).

However, while some bacteria elicit the production of indoles that generate a positive effect on the gut microbiome, indole can also have a less beneficial effect when metabolized in the liver into indoxyl sulfate, a uremic toxin. Too much can increase the risk of kidney dysfunction and vascular disease.

Indole, the intestine, and inflammation

Studies have shown that indole and its derivatives interact with the gut epithelium. Indole and I3A may help to maintain intestinal mucosal homeostasis, while IPA improves gastrointestinal barrier function through the activation of PXR, which inhibits inflammation (Zhao et al. 2019, Taleb 2019).

Indole has also been found to have anti-inflammatory properties, with several studies showing that indole reduces mucosal inflammation (Knudsen et al. 2021). I3A has been shown to influence lipolysis and reduce the hepatic inflammatory response in the presence of AhR (Krishnan et al. 2018).

In the kynurenine pathway, tryptophan is degraded by indole derivatives such as IDO, triggered by proinflammatory cytokines. The tryptophan/kynurenine ratio a useful indicator of IDO activity, often used as a marker of inflammation and immune response in diseases including COVID-19 (Thomas et al. 2020).

Similarly, IDO modulates the immune response to tumor cells, which makes it a useful target for cancer therapies (Uyttenhove et al. 2003). Interestingly, people who eat diets high in tryptophan seem to have lower rates of cancer. Several anticancer drugs, such as vincristine and vinblastine, are indoles, while indole derivatives continue to be explored as possible cancer-prevention targets.

Many indole derivatives are AhR ligands, which determine the reactivity of AhR.
AhR activation can affect immune regulation, intestinal homeostasis and carcinogenesis (Hubbard et al. 2015). AhR activity seems to be very high in some tumor cells, which may be linked to its role in inflammatory signaling. AhR could be an indicator of cancer aggressiveness: there are both positive and negative correlations of AhR signaling and poor prognosis, depending on the type of cancer (Saito et al. 2014). An increase in the kynurenine/tryptophan ratio has also been linked to cancer progression (Hubbard et al. 2015).

Indole itself is a major intercellular signal molecule in the microbiome (Lee et al. 2010). It can affect drug resistance, virulence of pathogenic bacteria, plasmid stability and biofilm formation. For example, an extracellular signal is just one of indole’s many functions in relation to E. coli.

Indole derivatives have been shown to have both neuroprotective and neurotoxic effects. IPA may have a neuroprotective effect, which makes indole an interesting subject of study in the search for treatments for Alzheimer’s disease (AD) (Pappolla 2021). IPA has been shown to protect neurons and neuroblastoma cells against damage caused by amyloid beta-protein (Abeta), an amino acid peptide involved in AD progression. Treatments focused on inducing higher levels of IPA in microbiota are being explored to promote brain health in older people.

Indole is also found in neurotransmitters such as serotonin, which plays a crucial role in brain and cognitive function. Unregulated serotonin levels can lead to depression, and both synthetic and plant-based indole alkaloids have been investigated for use in antidepressant drugs (Hamid et al. 2017). Plant-based indoles such as psilocybin and dimethyltryptamine are attracting growing interest as potential treatment for many psychological and mood disorders, due to the psychotropic effects (Hamid et al. 2017).

However, indoles are also associated with neurotoxic effects. One animal study found that excessive levels of indole were associated with reduced motor activity and increased anxiety, suggesting that people whose gut microbiota produces too much indole could be prone to mood disorders (Jaglin et al. 2018).

Explore more Metabolites of the month
Back to HOME