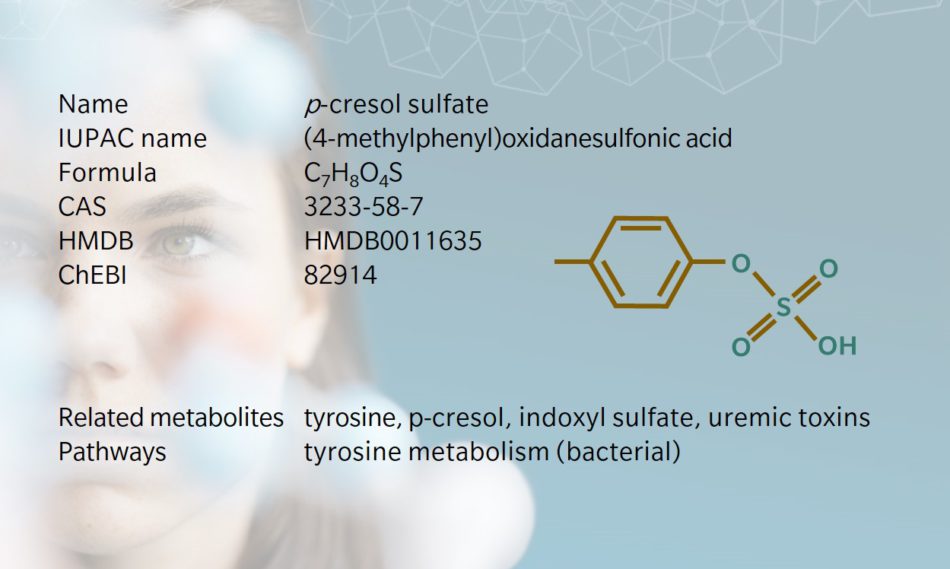 Metabolite of the month – p-cresol sulfate

Also referred to as p-cresyl sulfate, this metabolite is a sulfate conjugate of the bacterial metabolite p-cresol, which is a uremic toxin. p-Cresol sulfate originates when gut bacteria ferment proteins in the large intestine. Researchers should bear in mind that sample preparation can promote deconjugation back to the p-cresol precursor, so high levels of p-cresol but not p-cresol sulfate in blood samples can be considered an indicator of sample degradation (Loor et al. 2005).

When dietary proteins reach our large intestine, their amino acids can be fermentation substrates for commensal bacteria. Some of the resulting metabolites are essential nutrients, while others can be detrimental to our health. p-Cresol sulfate is a product of tyrosine fermentation by bacteria of the Coriobacteriaceae or Clostridium genera (Saito et al. 2018), followed by sulfation by the host’s cells (Wikoff et al. 2009). This sulfation step is part of phase II detoxification mechanisms that promote the elimination of harmful toxins by the kidneys. Once in the blood, p-cresol sulfate binds with high affinity to albumin, but is also found to a small extent in its free form (Viaene et al. 2013).

When the kidneys are well-functioning, p-cresol sulfate can be excreted in the urine. However, as kidney function declines, the blood level of p-cresol sulfate increases, hence its classification as a uremic toxin (Glassock 2008). Unsurprisingly, we see higher levels of p-cresol sulfate in the blood as chronic kidney disease (CKD) progresses and renal function declines (Wu et al. 2011; Liabeuf et al. 2010). Because p-cresol sulfate is mainly protein-bound in the blood, most of it escapes artificial blood filtration by dialysis and remains in the patient’s body, which complicates CKD management (Ma et al. 2020).
In renal cells, p-cresol sulfate has been linked to damage to tubular cells mediated by oxidative stress (Watanabe et al. 2013), and activation of epithelial-to-mesenchymal transition which can lead to fibrosis (Sun et al. 2012). It’s also associated with inflammation and overall kidney damage (Vanholder et al. 2014), and is also linked to one of the main co-morbidities of CKD: cardiovascular disease (Meijers et al. 2010).

There is a well-established link between high blood levels of p-cresol sulfate and mortality from cardiovascular disease (Barreto et al. 2009; Cheng-Jui Lin et al. 2015). However, there are question marks around whether p-cresol sulfate and other uremic toxins are reliable predictors of cardiovascular disease. A 2017 clinical trial suggests that their predictive power is relevant in patients who also have a low level of circulating albumin, but does not hold up when applied to a broader population (Shafi et al. 2017).
On the other hand, levels of p-cresol sulfate appear to be negatively correlated with both peak cardiac power and aerobic exercise capacity in male CKD patients (Chinnappa et al. 2018). At the cellular level, p-cresol sulfate and other uremic toxins have been shown to induce the calcification of vascular smooth muscle cells (Hénaut et al. 2018). The mechanism involves the production of oxidative stress and inflammation, leading to a phenotypic switch from a contractile to a synthetic phenotype, including proliferation, senescence and calcification (Chang et al. 2020). In epithelial cells, p-cresol sulfate and indoxyl sulfate (a metabolite of tryptophan produced through bacterial fermentation in the intestine) are also thought to induce epithelial-to-mesenchymal transition, leading to fibrosis and calcification of the vessels (Opdebeeck et al. 2020).
In a CKD rat model, a 7-week exposure to p-cresol sulfate or indoxyl sulfate was shown to induce arterial calcification. Exposure also triggered a prodiabetic state characterized by impaired glucose homeostasis and a decrease in GLUT1 expression (Opdebeeck et al. 2019). Interestingly, one difference between rats that did and did not experience calcification was the activation of lipid-regulating nuclear receptors LXR, FXR and PPAR. This suggests a possible protection mechanism against p-cresol sulfate-induced effects. The administration of p-cresol sulfate to healthy mice also triggers insulin resistance and redistribution of lipids in the muscle and liver tissues (Koppe et al. 2013).

p-Cresol sulfate, microbiota and the gut

A 2009 metabolomic comparison of the plasma of conventional vs. germ-free mice identified hundreds of features altered by the intestinal microbiome, including p-cresol sulfate and its precursor, tyrosine (Wikoff et al. 2009). The study also identified sulfation as a mechanism to modify metabolites resulting from the fermentation of tyrosine (p-cresol sulfate), phenylalanine (phenyl sulfate), tryptophan (indoxyl sulfate) and flavones (equol sulfate and methyl equol sulfate). In a 2011 comparison of dialysis patients with and without a colon (following colectomy), confirmed the colonic origin of p-cresol sulfate and indoxyl sulfate in humans (Aronov et al. 2011).
The gut microbiota is a highly competitive environment. Metabolites produced by commensal bacteria can act as bacteriostatic molecules, i.e. compounds that impede the growth of other bacteria. Clostridium difficile, one of the most studied bacteria living in our intestine, uses p-cresol to reduce bacterial diversity in its environment (Passmore et al. 2018; Selmer and Andrei 2001). This bacteriostatic effect is also visible when adding millimolar concentrations of p-cresol to sewage water, impacting bacteria, protozoa and metazoan (Erb et al. 1997).
Comparing the microbiota of patients with end stage renal disease (ESRD) to that of healthy subjects showed a large difference in microbial diversity. ESRD patients had more bacteria expressing hydroxyphenylacetate decarboxylase, an enzyme responsible for the conversion of tyrosine to p-cresol, and less bacteria capable of converting dietary fiber to short-chain fatty acids (Wong et al. 2014).

Although uremic toxins are thought to contribute to cognition complications in CKD patients (Watanabe et al. 2014), few studies have looked at the role of p-cresol sulfate in neurological disorders. A 2020 study conducted on Parkinson’s disease (PD) patients revealed that levels of p-cresol sulfate in cerebrospinal fluid (CSF) were higher than circulating levels (Sankowski et al. 2020), thus demonstrating the capacity of the metabolite to cross the blood-brain-barrier (BBB) in a significant amount. The authors suggest that this is due to a damaged BBB, but cannot exclude the possibility that p-cresol sulfate crosses the BBB via organic anion transporters (OATs), which are known to process the secretion of p-cresol sulfate in renal tubular cells (Miyamoto et al. 2011).
In an in vitro screening of uremic toxins, p-cresol sulfate was one of the least toxic molecules in cultured mouse hippocampal neuronal cells (Kimio Watanabe et al. 2021). Although it did not induce cell death at the concentrations tested, this does not rule out the possibility that p-cresol sulfate could affect the physiology and functions of the cells, even at the concentrations tested.
Another study looked at the association of plasmatic levels of uremic toxins with cognitive impairment in patients undergoing hemodialysis. This found a link with indoxyl sulfate but not p-cresol sulfate, although it only investigated the association with free circulating levels of these mostly albumin-bound molecules (Yi-Ting Lin et al.). Further exploration of the role of p-cresol sulfate in these mechanisms could have implications for the understanding and treatment of multiple neurological conditions.

Back to HOME
Decide which metabolite comes next