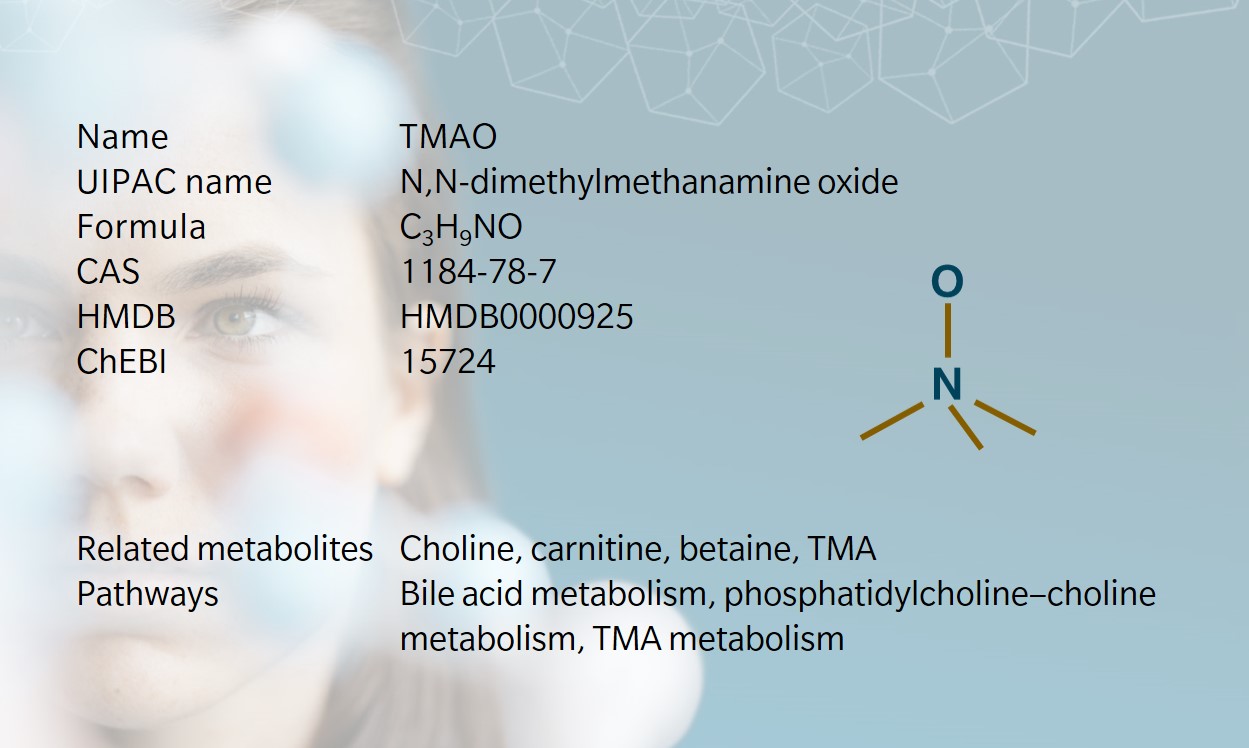 TMAO concentration appears to increase in fish tissues as they inhabit greater depths in the ocean, allowing them to withstand increasing hydrostatic pressure (Yancey et al. 2014). TMAO metabolizes into trimethylamine (TMA), which is responsible for the pungent smell of degrading seafood.

It’s not all bad news though: research points to TMAO having several positive effects too, including circulatory benefits and helping cells maintain volume under stress (Ufnal et al. 2015).

TMAO is biosynthesized from TMA, which is generated when gut bacteria metabolize choline, derived from lecithin, L-carnitine and betaine (Janeiro et al. 2018, Rohrmann et al. 2016). TMA is transported to the liver and oxidized into TMAO by the liver enzyme FMO3 (Wang et al. 2011). TMAO is then stored in cells or cleared by the kidneys.

The amount of TMAO found in plasma can be affected by diet, gut microbiota, drugs, and liver enzyme activity (Janeiro et al. 2018). Diet is the main source of TMAO and TMA precursors. TMAO levels increase after consuming foods high in choline, carnitine and lecithin, including red meat, seafood, eggs and dairy (Velasquez et al. 2016). Vegan and vegetarian diets do not seem to select for the gut bacteria needed to metabolize these precursors into TMAO (Koeth et al. 2013).

Small amounts of L-carnitine are synthesized endogenously from lysine and methionine, in the kidney, liver and brain (Cave et al. 2008). Similarly, humans can produce some choline endogenously through hepatic synthesis, though not enough to meet the body’s needs. TMAO is often seen as a waste product of choline, but does appear to play an important role in many biological processes (Ufnal et al. 2015).

TMAO and the microbiome

A short-term crossover feeding trial in healthy young men showed that TMAO production is a function of individual differences in the gut microbiome, and demonstrated differences in how microbiota respond to dietary TMAO and its precursors (Cho et al. 2016). For example, fish consumption led to higher quantities of TMAO metabolites than eggs or beef.

Dietary TMAO was absorbed without needing any processing by gut microbiota. Individuals who produced higher levels of TMAO seemed to have a less diverse gut microbiome.

Is TMAO good or bad?

A major debate in current TMAO research surrounds its role in linking the gut microbiome and cardiovascular disease. The link is there – but literature is unclear on whether TMAO is a bystander or a mediator (Janeiro et al. 2018), and whether it should be sought out or avoided in a healthy diet.

On one hand, TMAO and its precursors are found in foods eaten regularly in heart-healthy Mediterranean diets, particularly seafood. Some research suggests that TMAO could be beneficial for heart function. A study on hypertensive rats found that higher levels of TMAO had no negative effects on circulation, and a low-dose TMAO treatment helped reduce hypertension-related heart disease symptoms (Huc et al. 2018).

It is thought that TMAO causes changes in cholesterol and bile acid metabolism leading to cell inflammation, which in turn creates an atherogenic effect, but whether TMAO is a causal factor or not remains unclear (Janeiro et al. 2018, Winther et al. 2021).

There is also a growing body of evidence identifying TMAO as a missing link between gut dysbiosis and other conditions, including colorectal cancer (often linked to red meat consumption). This would suggest TMAO-rich foods should be left off the menu.

The connection between TMAO and CVD was first made using an animal model in 2011, which revealed that choline, TMAO and betaine were predictors of CVD risk. When gut bacteria were suppressed, TMAO production was limited, which in turn inhibited atherosclerosis progression (the primary underlying cause of CVD)

Human studies into the relationship between TMAO and atherosclerosis have been generally small or with mixed results (Meyer et al. 2016). In one frequently cited three-year study of over 4000 individuals, high levels of TMAO in plasma correlated with an increased risk of adverse cardiovascular events, independent of traditional risk factors.

However, the validity of these findings has been challenged because of the high prevalence of comorbidities and pre-existing inflammation markers among participants (Meyer et al. 2016).

Interestingly, TMA has not attracted the same attention as a potential risk factor for CVD, despite being a known uremic toxin (Jaworska et al. 2019). Nevertheless, evidence is accumulating to show an association between gut microbes and cardiometabolic disease, and elevated plasma TMAO levels do seem to predict future risk of major adverse cardiac events and CVD (Senthong et al. 2016).

The emerging association between gut dysbiosis and insulin resistance is another area of interest in TMAO research (Øellgaard et al. 2017). One systematic review and meta-analysis looked at TMAO levels and diabetes risk, with a combined dataset of more than 15,000 participants.

Gut dysbiosis is linked with an increased risk of kidney disease, particularly when TMAO and choline levels are elevated (Velasquez et al. 2016). In one prospective cohort study of CKD patients, mortality risk was 2.8 times higher in those with higher TMAO levels In another study, patients with end-stage renal disease on dialysis had TMAO levels forty times higher than the control group (Hai et al. 2015).

While CKD is known to alter the gut microbiome, there is mounting evidence to suggest that TMAO is not only a biomarker for CKD, but also contributes to disease progression This points to diet, microbiome, hepatic TMA metabolism, and TMAO behavior as potential therapeutic targets.

Trimethylaminuria, or ‘fish odor syndrome,’ is caused when a mutation of FMO3 prevents the conversion of TMA into TMAO. Individuals with TMAU excrete TMA, instead of TMAO, which causes a fishy smell in urine, sweat, and breath (Velasquez et al. 2016).

TMAU is inherited when both parents carry FMO3-altering genes, and can be triggered by diet and stress. It also affects more women than men, suggesting a link with sex hormones. Treatment usually focuses on avoiding foods rich in TMA or TMA precursors, suppressing TMA production in the gut with antibiotics, and taking supplements to enhance FMO3 enzyme activity and reduce TMA concentration (National Human Genome Research Institute 2018).

Explore other Metabolites of the month