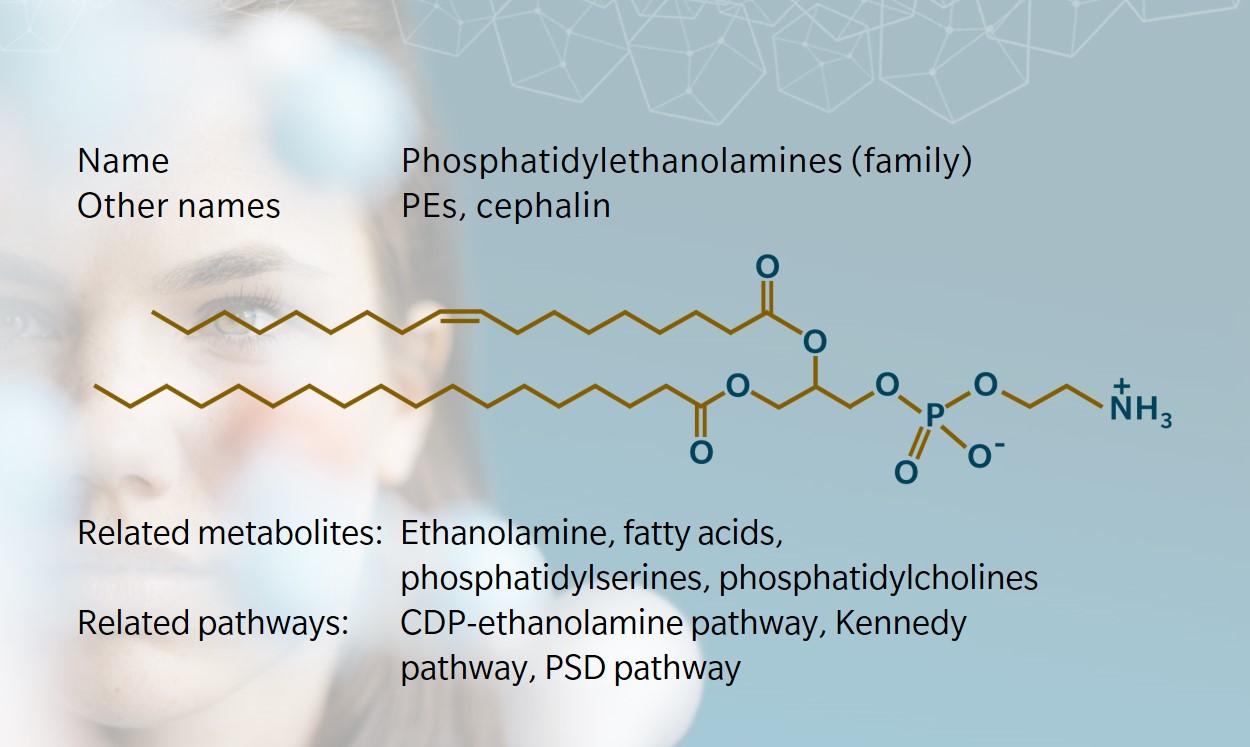 Metabolite of the month – Phosphatidylethanolamines

Phosphatidylethanolamine (PE) is a sub-class of phospholipids with a variety of functions in animals, plants and microorganisms. Like other phospholipids, PEs are more than simply the building blocks of membranes: their functions range from regulation of membrane fluidity to modulation of intracellular signaling, protein folding and post-translational modification. Together with phosphatidylserines (PSs), PEs were first isolated from brain tissue in 1884.

They were originally referred to as “cephalin”, deriving their name from the Greek word kephal, meaning head. In the brain, PEs constitute about 45% of all phospholipids. Today, we know that PEs come in many sizes (chain lengths of their fatty acyl groups) and shapes (number of unsaturations) and serve a variety of functions.

PEs consist of a glycerol backbone esterified in three positions by two fatty acids and a phosphoric acid. In the head group of this phospholipid, the phosphate group is combined to the small molecule ethanolamine. The latter is sourced from diet and found free in micromolar concentrations in biofluids in mammals (Patel et al. 2017; Vance et al. 2013). PEs are the main phospholipid in egg yolk.

To learn more about the contribution of MAMs to phospholipid transport, watch this webinar by Professor Jean Vance, whose research is behind many of the literature cited in this paragraph.

Another noteworthy observation is that in mammals, while PS decarboxylation yields PEs, triple methylation of PEs by the enzyme phosphatidylethanolamine N-methyltransferase (PEMT) yields PCs. This reaction is responsible for about a third of PC synthesis in the liver, providing PCs that are secreted in the bile to help digestion of lipids (Vance et al. 2013). In addition, the two branches of the Kennedy pathway meet in several places to convert intermediaries of PE synthesis to their equivalent in the PC branch (van der Veen et al. 2017).

As is the case with many lipid classes, “phosphatidylethanolamine” is often used in singular form, as if there were only one chemical structure for PE. However, as for PCs and other lipids that integrate fatty acyl groups in their structure, PEs are a large group of metabolites. Their structures vary according to the length and number of unsaturations of these fatty acyl groups, which confer a range of properties (Hishikawa et al. 2014).

With their typically conical shape, PEs impose a negative curvature to membranes (McMahon et al. 2015). Their detailed structure is also significant, as it influences membrane fluidity (Dawaliby et al. 2016). Typically, saturated fatty acyl groups will reduce membrane fluidity, while unsaturated groups will increase fluidity. Since the inner mitochondrial membrane is rich in PEs and poor in cholesterol (another lipid classically in charge of regulating membrane fluidity), the exact structure of PEs becomes paramount.

PEs also play a role in cytokinesis and the disassembling of the contractile ring needed for parting cells during cell division (Emoto et al. 2000). In the model organism Trypanosoma brucei (a parasitic protozoa), PEs have been studied for their contribution to cell cycle regulation and their involvement in the assembly of glycosylphosphatidylinositol (GPI) anchors of surface proteins (Signorell et al. 2009; Menon et al. 1993).

For more information on the many functions already described for PEs, see the review by Calzada et al. (2016) where the contribution of PEs to these and other mechanisms are detailed.

Phospholipids are key components of lipoproteins, the vesicles that transport lipids between organs via the circulation. The lipoproteins most loaded in triglycerides (TGs) are also rich in PEs. These are the chylomicrons that form in intestinal cells to support uptake of dietary lipids, and the very-low-density lipoproteins (VLDLs) that form in hepatocytes to distribute lipids (mainly TGs but also cholesteryl esters) to other organs.

Although PCs constitute the bulk of the phospholipids that form the vesicle, PEs are also present, with functions in vesicle assembly and secretion. If PE levels are too low during assembly of VLDL in liver cells, nascent VLDLs are discarded. In addition, PE levels are shown to decrease with VLDL “age”, pointing to a signal for quick uptake of newly formed vesicle based on their high PE content.

PEs also attract attention as metabolites that change with aging (Pradas et al. 2019; Dai et al. 2021). In the human brain, post-mortem analysis has shown that overall PE levels decreased with age in mitochondrial membranes. For example, the levels of the polyunsaturated fatty acid (PUFA)-containing PE 18:0_22:4 decreased by 20% in the mitochondria of the hippocampus in adults aged between 20 and 100 (Hancock et al. 2015).
Naturally, the discovery of links between PEs and aging have triggered research into the use of PE supplementation to increase lifespan. Positive results have been seen in model organisms and human cells via stimulation of autophagy (Rockenfeller et al. 2015).

PEs are also a point of interest for research into neurodegenerative diseases such as Alzheimer’s and Parkinson’s diseases, specifically in relation to PEs role in mitochondrial functions, including oxidative phosphorylation. Reducing PE synthesis has been shown to increase mitochondrial membrane potential and reduce activity of the electron transport chain and ATP production (Tasseva et al. 2013).

Synthesis of amyloid beta, a prominent peptide in the pathophysiology of Alzheimer’s disease, is synthesized by enzymes anchored in membranes. In cell models and in Drosophila melanogaster (fruit fly), amyloid beta production was found to increase when membrane PE levels were reduced, and decrease when PE levels were increased. (Nesic et al. 2012).

Emoto K. et al.: An essential role for a membrane lipid in cytokinesis. Regulation of contractile ring disassembly by redistribution of phosphatidylethanolamine. (2000) The Journal of cell biology | https://doi.org/10.1083/jcb.149.6.1215