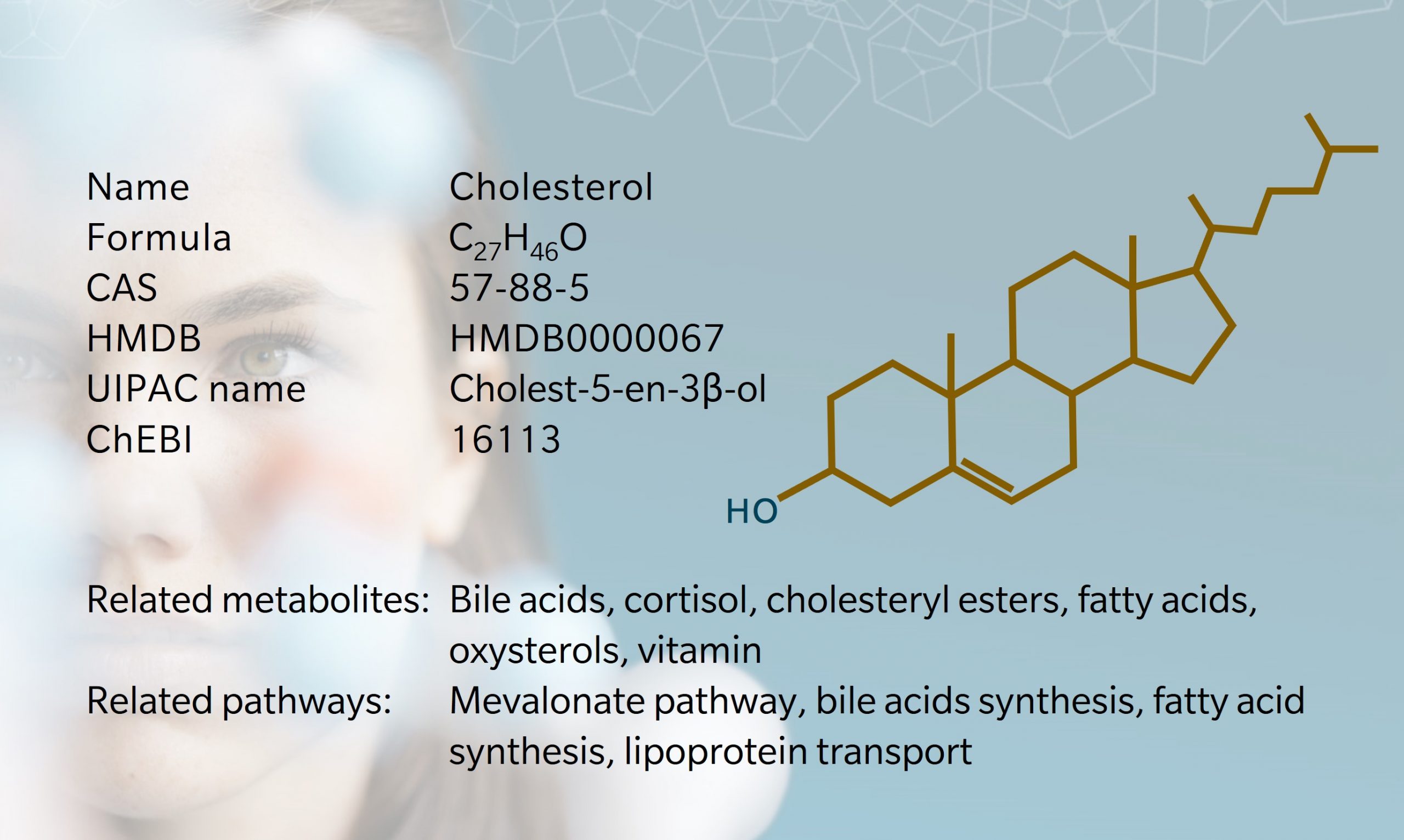 Metabolite of the month – Cholesterol

Cholesterol is a lipid found in all animal cell membranes, contributing to cell structure and integrity, membrane fluidity, and transportation of signaling molecules (Goldstein et al. 2009). It is also a precursor to steroid hormones, bile acids and vitamin D.

The study of cholesterol has a long history. It was first discovered in 1769 by Poulletier de la Salle, who observed a waxy substance in bile and gallstones (Olson 1998). The name is derived from “cholesterine”, a name given to it by Chevreul in 1815 based on the Ancient Greek words for bile (chole) and solid (stereos). By the early 19th century, cholesterol was becoming better understood as a component of blood plasma.

In the 1960s and 70s, the protein components and receptors of cholesterol lipoproteins were identified, allowing a greater understanding of its role in the fat transport system. This led to the “cholesterol wars”, where controversy surrounding the role of lipids (specifically dietary cholesterol) in atherosclerosis and coronary heart disease dominated lipid research for the remainder of the 20th century, arguably hindering medical progress (Kuijpers 2021).

Around 70% of cholesterol in humans is synthesized endogenously, with the remaining 30% obtained via the diet (Bourgin et al 2020). Biosynthesis of cholesterol occurs in the liver through either de novo or exogenous biosynthesis. De novo biosynthesis is a complex process, starting with acetyl-coenzyme A (CoA), derived via oxidation reactions (Tsuchiya et al. 2010). Acetyl-CoA condenses to 3-hydroxy-3-methylglutaryl-CoA (HMG-CoA). This is catalyzed by HMG-CoA synthase and reduced by HMG-CoA reductase to produce mevalonate. Mevalonate is then converted to squalene, a precursor of sterols, via a series of enzymatic reactions. A further phase of enzymatic reactions converts these sterols into cholesterol in the endoplasmic reticulum.

In the exogenous pathway, dietary cholesterol comes from steroids in animal tissues, with the main sources including eggs, meat and dairy products. To be absorbed, ingested cholesterol esters must be hydrolyzed by pancreatic enzymes to form free fatty acids (FFAs) (Lecerf 2011). Around 1000 mg of cholesterol reaches the intestinal lumen each day, from both endogenous and exogenous pathways.

Cholesterol gets mixed reviews, with HDL often labelled as “good” cholesterol and LDL considered “bad”. Elevated HDL may have a protective effect, and too little can increase the risk of cardiovascular disease. Conversely, elevated LDL levels can cause a build-up of fats in the blood, causing clots and cardiovascular disease (Soliman 2018). However, both play an essential role in human health, and an imbalance of either can have deleterious effects, so it is now commonly accepted that the names “good” and “bad” cholesterol make little sense.

Cholesterol levels in extracellular vesicles (EVs) have attracted attention as potential diagnostic markers of cardiovascular disease, cancer and other diseases (Pfrieger et al. 2018). EVs contain cholesterol metabolites such as 27-hydroxycholesterol, which has been associated with breast cancer cell lines (Roberg-Larsen 2017). These membrane-enclosed structures released by cells may also be a method of drug delivery, by transporting proteins, genes, microRNAs and viruses to treat disease (Pfrieger et al. 2018).

Cholesterol as a precursor

Cholesterol is a precursor of the following metabolites:

• bile acids (such as cholic acid), which aid digestion, contribute to the absorption of lipophilic nutrients in the intestine, and support gene and metabolism regulation;
• steroid hormones (such as cortisol and sex hormones) which regulate numerous physiological functions and metabolic processes, and are synthesized from cholesterol in the adrenal gland and gonads through the common precursor steroid pregnenolone, using the LDL/LDL-receptor pathway (Hu et al. 2010);
• vitamin D, which helps regulate calcium and phosphate levels and supports bone, dental, muscular and paracrine functions;
• oxysterols, which are oxygenated derivatives of cholesterol that play a role in bile acid synthesis, the immune system and bone marrow function (Oguro 2019).

Cholesterol is an essential building block of cell membranes, interacting with phospholipid fatty-acid chains to influence membrane fluidity and integrity. It does this primarily through sphingolipid rafts. Lipid rafts help regulate cell signaling, membrane transport and protein trafficking, though precisely how they affect cholesterol transport is still unknown (Cerqueira et al. 2016, Wang et al. 2020). The involvement of cholesterol-enriched lipid rafts has been observed in studies of viruses including influenza, human immunodeficiency virus (HIV), Newcastle disease virus (NDV), herpes and others.

Cholesterol is an important component of the myelin sheath, along with sphingomyelins (Poitelon et al. 2020). The myelin sheath surrounds nerve cell axons, which makes it relevant to the study of diseases related to the central nervous system and neurophysiology.

Myelin cannot be synthesized without cholesterol and contains the largest pool of free cholesterol in the body (Poitelonet al. 2020). Most cholesterol in myelin is derived from de novo synthesis in oligodendrocytes and astrocytes, since blood-based cholesterol cannot cross the blood-brain barrier.

Around a quarter of the body’s cholesterol is contained in the brain (Björkhem et al. 2004). As noted, cholesterol availability is a crucial factor in brain development and neuronal function. Changes in cholesterol metabolism in the central nervous system have been implicated in neurologic disorders, including Alzheimer’s disease (AD), Huntington’s disease and Parkinson’s disease (Zhang et al. 2015).

Several studies have linked hypercholesterinemia and lipoprotein isoforms such as ApoE4 to AD. One study showed that lower levels of cholesterol precursors may reduce the neuroprotective effect on mitochondrial energy metabolism, while non-enzymatically produced metabolites may contribute to inflammation, pointing to cholesterol metabolism as a potential therapeutic target in AD (Varma et al. 2021).