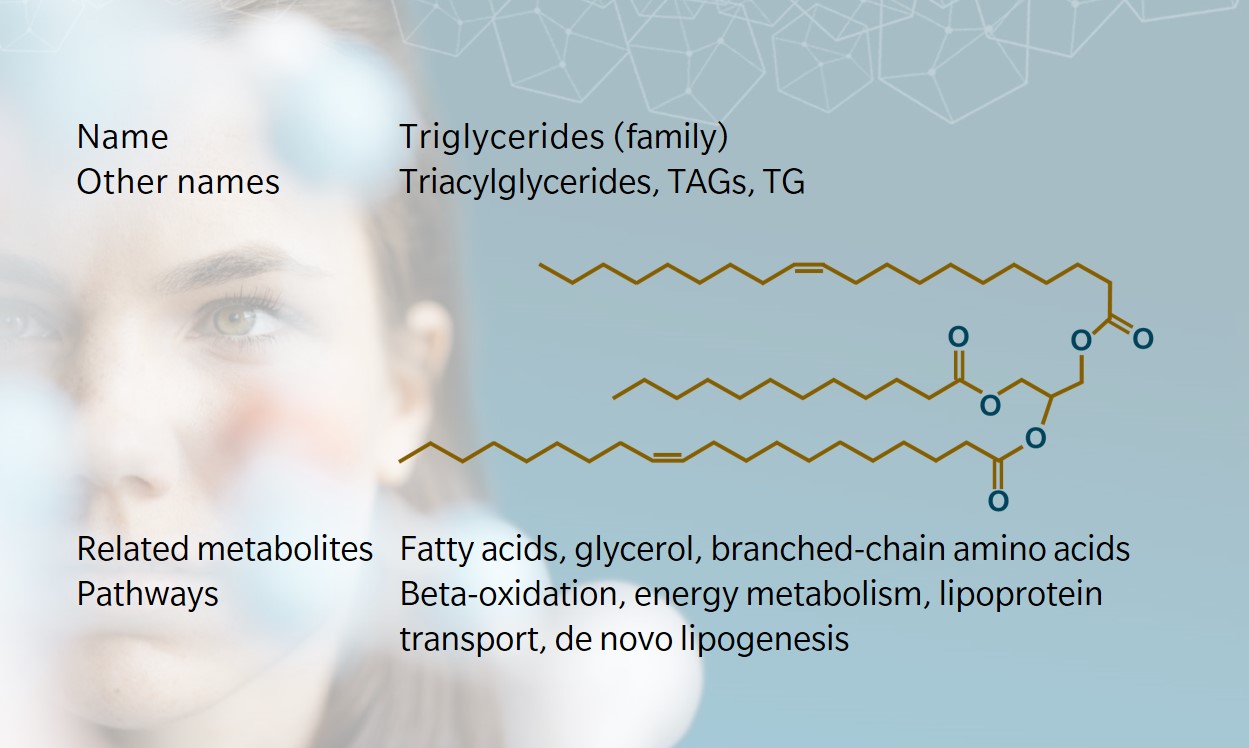 Metabolite of the month – Triglycerides

Triglycerides are complex molecules used for the storage and transport of non-soluble fatty acids in the body. They help transport fat and glucose from the liver, circulating continuously throughout the vascular system. When metabolized, they are a major source of energy in mitochondria. Triglycerides are sourced from consumption of high-fat foods, or synthesized in the liver or adipose tissue (Alves-Bezerra and Cohen 2017).

The idea that fat may be transported around the body via the blood first emerged as early as the mid 17th century. Over the next three hundred years, our understanding of the fat transport system evolved as analytical techniques improved (Litchfield 1972, Olson 1998).

While triglycerides play an essential role in human health, elevated levels are associated with health problems such as obesity, cardiovascular disease, non-alcoholic fatty liver disease (NAFLD) and pancreatitis. Lifestyle factors are most often to blame, particularly a high-fat diet, but high triglycerides levels can also be attributed to a genetic condition known as hypertriglyceridemia. Some medical conditions such as kidney disease, type 2 diabetes, and thyroid disorders can also affect plasma triglyceride levels (Pejic and Ledd 2006).

Like all lipids, triglycerides (or triacylglycerols) are composed primarily of carbon, hydrogen and oxygen atoms. They have a glycerol backbone bound to the esters of three fatty acids, and form following a condensation reaction. Fatty acids have chains of varying numbers of carbon atoms, which are joined either by single bonds (saturated fats), double bonds (unsaturated fats), or multiple double bonds (polyunsaturated fats). The tightly formed carbon atoms in saturated fats means these are usually solid at room temperature, like butter. Unsaturated fats are looser and are more likely to be liquids. Most naturally occurring fats contain a range of triglycerides, which means they melt at varying temperatures.

Triglycerides may contain three identical or three different fatty acids. Triglycerides with no double carbon bonds are structured in a straight zigzag. Those with double bonds have either a cis or trans configuration, depending on whether the hydrogen atoms are on the same side (cis) or opposite sides (trans) (National Research Council (US) Committee on Diet and Health 1989).

Simple triglycerides, where all three fatty acid esters are the same, take their common name from the fatty acid from which they are derived, such as palmitin, derived from palmitic acid. Scientific nomenclature varies, describing the number of carbons and double bonds in the whole molecule with varying degrees of detail. At biocrates, we use a nomenclature where one fatty acid is counted individually and the other two are summed. For example, TG(20:1_32:1) has one fatty acid with 20 carbons and one double bond, plus two fatty acids that add up to 32 carbons and one double bond. Thus, several TGs fit this description, such as the one depicted on the metabolite card above.

Triglycerides contribute around 90-95% of dietary fat (Iqbal and Hussain 2009), and are found in many food sources, from dairy products to meat. Bile salts in the liver break the fat into micelles, which are hydrolyzed by pancreatic lipase to form fatty acids and monoglycerides (Bayly 2014). Through de novo lipogenesis (DNL), these are then turned back into triglycerides in enterocytes, combining cholesterol and proteins to form chylomicrons, which are triglyceride-rich lipoproteins. The chylomicrons enter the lymphatic system before being transported around the body via the blood (Alves-Bezerra and Cohen 2017).

Endogenous synthesis occurs mostly in the liver and adipose tissue, but also in the intestines, muscles, brain and other organs. There are several pathways to triglycerides synthesis, including the glycerol-3-phosphate pathway, the dihydroxyacetone phosphate (DHAP) pathway, and the monoacylglycerol pathway (Tracey et al. 2018). Each involves the enzymatic conversion of fatty acids into acyl-CoA molecules. Through these processes, triglyceride molecules repeatedly assemble and disassemble to cross membrane barriers and make sure energy gets to the right organs.

Other metabolites such as glucose, fructose, acetate and the branched-chain amino acids leucine and isoleucine also serve as precursors of acetyl-CoA and contribute carbons to the de novo synthesis of fatty acids that will enter DNL (Wallace 2020).

Because the liver is the main site of fatty acid metabolism, it’s the first responder to a high triglyceride diet. A diet that’s too high in dietary fats can affect hepatic fatty acid metabolism, causing a build-up of triglycerides within the hepatocytes – a fatty liver. Ultimately, this can lead to non-alcoholic fatty liver disease (NAFLD) (Alves-Bezerra and Cohen 2017).

Fatty liver used to be considered a sign of alcoholism, until it became clear that people (including children) could suffer from a fatty liver without drinking excessively. Alcohol does cause a fatty liver, but so does a diet high in sugar and fats, especially when combined with a sedentary lifestyle.

As noted, most triglycerides are stored in adipose tissue. Human and animal models show links between lower rates of DNL in adipose tissue and a higher likelihood of insulin resistance (Wallace 2020). Insulin signaling triggers the mobilization of triglycerides stores (Sears and Perry 2015). It keeps triglycerides levels in check by enabling the synthesis of lipase, the enzyme needed for triglyceride hydrolysis (Sadur and Eckel 1982).

Omics-based techniques are proving useful in furthering understanding of the metabolites and lipids involved in diabetes and related conditions. For example, a systematic review of studies using metabolomic techniques to investigate pre-diabetes and type 2 diabetes confirmed the association between high concentrations of triglycerides and an elevated risk of disease (Guasch-Ferré et al. 2016).

Explore other Metabolites of the month
Back to HOME