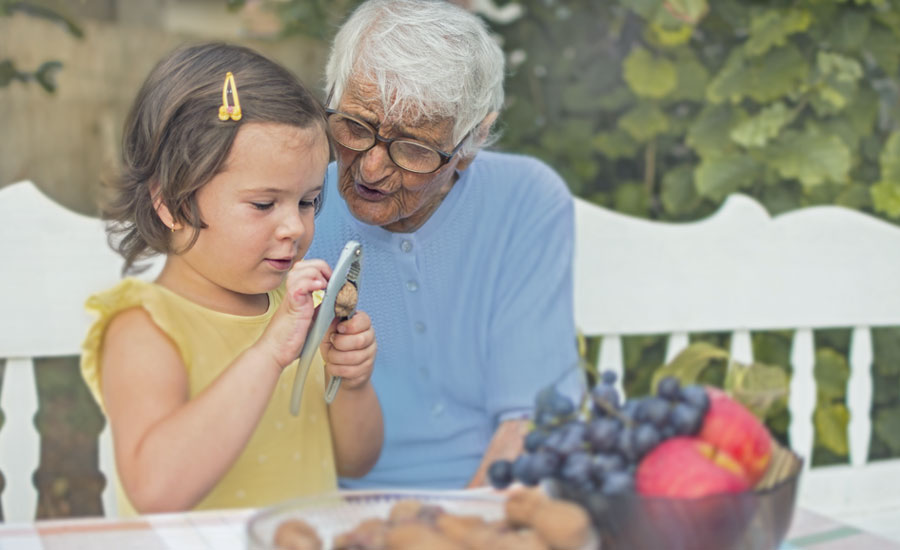 Is Alzheimer’s a metabolic disease?

Walnuts are incredibly rich in lipids. Likewise, the brain is also incredibly rich in lipids. Coincidence or not, they are similarly shaped, and, for generations, it has been said that nuts are healthy for the brain. Thus, it is no wonder that lipid metabolism, and the relationship between nutritional lipid sources and brain health have been early focus areas for metabolomics research in Alzheimer’s Disease (AD) (Grimm et al., 2011). Lipids have also been the cornerstone of the first blood-based signature for the risk of developing Alzheimer’s Disease (Mapstone et al., 2014). In addition to lipids, metabolites from various classes have drawn much attention in the past decade, cumulatively signifying the complex relationship between metabolism and brain health, while simultaneously demonstrating this field of research to be exciting and promising.

The key question will be: how can metabolomics eventually provide benefits in patient care?
Cognitive impairments are often more difficult to cope with than physical ailments – both for patients as well as for their families. Furthermore, while great strides have been made to improve the standard of care for many physical diseases, neurological diseases, and Alzheimer’s Disease in particular, has proven to be a hard nut to crack. Pun intended.

Arguably, more than any other field of biomedical research, disease-altering treatments for Alzheimer’s Disease have remained elusive. The failure to develop effective therapies for the most well-established components of AD pathophysiology (i.e. Amyloid beta deposition and neurofibrillary tangles) has prompted researchers to explore alternative treatment approaches. A complete review is beyond the scope of this article (an overview by Yiannopoulou and Papageorgiou, 2020, and Cummings et al., 2019, may be a good starting point).

Yet, in lieu of a comprehensive overview on AD treatment approaches, herein, we focus on the potential and the implications of two areas in which therapeutics are currently under development in Phase III clinical trials.

The combination of Cromolyn and Ibuprofen is currently in a Phase III clinical trial targeting neuroinflammation in prodromal to mild disease. Both targets are, in fact, related to immunometabolism. While cromolyn inhibits release of inflammatory mediators such as the small molecule histamine, Ibuprofen is a non-selective COX-2 inhibitor, that inhibits lipid breakdown via the arachidonic acid pathway.
It is worth noting here that the sphingomyelin class of lipid metabolites are also important in neuroinflammation and neuroprotection. Interestingly, this lipid class was named for its function in protecting myelin sheaths.
Beyond the COX-2 pathway of lipid metabolism, sphingomyelins are another class of lipids important in neuroinflammation and neuroprotection. This class of lipids was named for its function protecting myelin sheaths.

The combination of Losartan, Amlodipine, Atorvastatin and exercise is suggested to reduce AD risk due to the protective effects elicited on the vasculature. It is well established that exercise has pronounced effects on metabolism, albeit, with a high degree of variability among individuals. Meanwhile, it has been shown that the efficacy of the Angiotensin II Receptor blocker, Losartan, can be predicted by certain metabolites, such as asymmetric dimethylarginine (ADMA)  in particular. Atorvastatin is known to elicit atheroprotective effects by modulating lipid metabolism. Interestingly, however, a recent study on the metabolic effects of Atorvastatin found that this atheroprotection is seemingly dependent on gut microbial composition (Zimmermann et al., 2020).

While this intervention relies on cheap, available drugs with favorable safety profiles, no drug is without side effects or potential adverse interactions with other medications. Given the potentially long-term administration of such treatments, it is imperative to establish a means to monitor efficacy on a molecular level, and to thereby enable the development of truly personalized recommendations for pharmaceutical and lifestyle interventions.

A better understanding of the early metabolic changes associated with the development of Alzheimer’s Disease may enable the discovery of new targets. Metabolomics can detect small biological changes, well before the disease becomes clinically apparent. This level of biological sensitivity not only facilitates the discovery of predictive biomarkers, but correspondingly, enables earlier treatment administration, and the use of more effective interventions that target the earliest phase of disease pathophysiology.

… but are the current targets really that bad?

Drugs targeting Amyloid Beta and Tau thus far have failed to meet their end points in clinical trials. Accumulation of these proteins occurs over many years or even decades, and by the time that AD is diagnosed, much of the damage has already been done. Does this mean that those drugs are completely ineffective?

No, it doesn’t. Not necessarily. If that were the case, probably no drug in these categories would have ever made it into Phase II and Phase III trials. Even if considerable damage has already been done before the initiation of treatment, some AD patients may still observe measurable improvement or preservation of cognitive function with these drugs.

It is entirely possible that the premise of the studies was wrong. Maybe the question should not be “Does the drug work?”, but rather “For which patient does the drug work?”, or even “Which treatment will work for the patient?”. In addition to the above-mentioned results, Toledo et al. (2017) have shown that metabolic profiles are dependent on disease stage and that certain metabolic pathways are associated with specific components of AD pathophysiology. For drugs lacking sufficient efficacy in the overall patient population, these insights may be crucial for identifying patient subsets that are indeed responsive to treatment and may also reveal the stage at which drug administration would be more effective.

Diving deeper: Which metabolic pathways are relevant, and how?

To drive the point of this article, we propose some gross simplifications and discuss how three areas of metabolism interact with key components of AD pathophysiology

In the following section, we will be discussing the roles of lipid metabolism, amino acids and microbiota-derived secondary bile acids, and how these might explain the progression of AD over decades.

As we have mentioned at the beginning of this article, nutritional factors may play a role in the development and preservation of brain function, and it is also evident in the area of lipid metabolism. As Toledo et al. (2017) pointed out, changes in the metabolism of phospho- and sphingolipids are thought to occur early on, in association with Amyloid Beta aggregation, possibly due to alterations in membrane structure and function.

Beyond being essential components of cellular membranes, lipids are also intimately involved in inflammatory processes via the arachidonic acid pathway. Lipid metabolism also explains the association between the ApoE4 genotype and the risk for both atherosclerosis and Alzheimer’s Disease. ApoE4 has important roles in lipid metabolism and gene-lifestyle interaction and is assumed to be a major reason for the wide variability in outcomes within a genetic risk group.

Beyond inflammation, Alzheimer’s Disease is associated with changes in cellular bioenergetics. Insulin-resistance and down-regulation of glucose transporters may lead to the utilization of energy production sources other than glucose (discussed in detail in An et al., 2017; confirmed in a proteomics study by Johnson et al., 2010) . This includes the lipolysis and consequently the beta-oxidation of fatty acids, such as acylcarnitines, in mitochondria. In addition, , Toledo et al. (2017) reported changes in acylcarnitine metabolism, possibly indicating mitochondrial dysfunction. Acylcarnitines are assumed to have other functions in the brain as well, including neuroprotection (Jones et al., 2010).

Although chemically a uniform group of metabolites, amino acids serve a vast variety of biological functions, which connects them with each of the pathophysiological concepts outlined above:

Mahmoudian Dehkordi et al. (2019) have shown that an increase in microbiota-produced secondary bile acids is associated with increased risk of cognitive impairment in AD. Interestingly, those bile acids have also been associated with immune response-related AD risk genes.

Secondary bile acids are more hydrophobic, and thus more cytotoxic, than endogenously produced primary bile acids. In addition to their cytotoxicity, bile acids affect a wide variety of biological functions via interactions with the nuclear receptor FXR. Among other effects, FXR regulates immune responses, as well as the expression of genes that regulate energy homeostasis & glucose metabolism

We are far from fully understanding how Alzheimer’s Disease evolves over decades, and which role metabolism plays at each step of the way. So again, if we want to integrate the findings stated above into a concept of how AD evolves in response to nutritional and lifestyle factors, we need to make simplifications.

If we hypothesize that Alzheimer’s Disease is effectively a downward spiral characterized by increasing metabolic dysregulation and declining cognitive function, here’s how it might be understood:

Certainly, additional research is needed to evaluate the validity of this hypothesis. Further, it is safe to assume that these processes do not transpire in every individual in the same way. Nevertheless, this conceptualization does show how metabolomics could be a valuable tool to better understand each step of AD pathophysiology.

A reward worth the effort

If you have ever cracked nuts, you know it is quite a challenge. You must first crack open the tough shell, and then separate the shell and the seed. The seed may crumble in the process, and some pieces may remain stuck to the shell, despite your best efforts. The fragments are sharp, and you may cut yourself. Don’t even mention the mess it makes. When you are done, however, you can treat yourself to a healthy delight.

Likewise, research can be hard, difficult, messy and painful – and there’s no guarantee of any reward awaiting the researcher.

In the author’s opinion, metabolomics has great potential to help researchers reap rewards for their hard work. It is a relevant technology in the context of emerging therapeutic approaches. As metabolic changes occur early in the pathophysiology, years or even decades before the onset of symptoms, the technology can provide useful insights at every stage of the disease course.

Has this article been interesting food for thought? If so, get in touch and let us know about which aspect you would be interested to investigate!