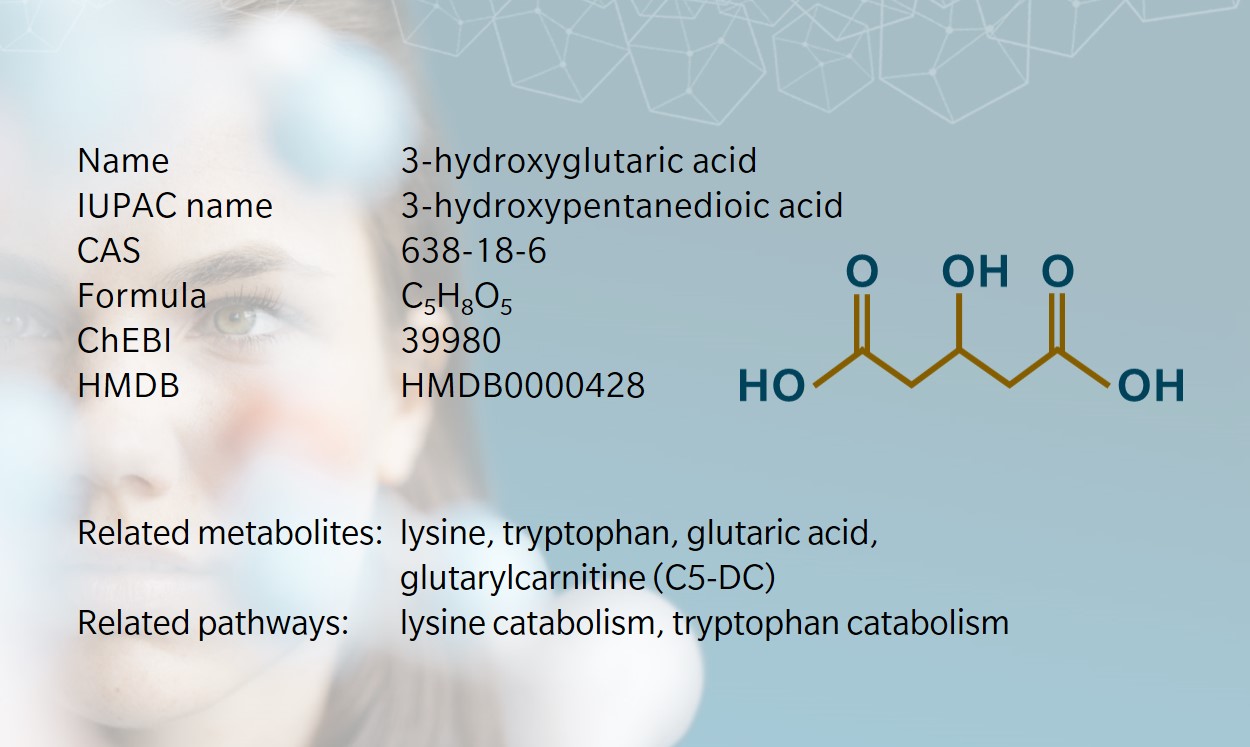 3-hydroxyglutaric acid is a dicarboxylic acid mainly described as an intermediate in amino acid catabolism. Together with other metabolites stemming from glutaric acid, it has been used for several decades as a biomarker for a rare disease with severe neurological consequences. Very little information is currently available about signaling functions, although it has been shown to have a direct effect on neuronal receptors.

Analytical methods similar to those used in metabolomics (e.g. gas or liquid chromatography coupled to mass spectrometry) have also identified 3-hydroxyglutaric acid as a secondary organic aerosol detected in the troposphere. In this context, 3-hydroxyglutaric acid has been used as a tracer of the oxidation of alpha/beta-pinene, the metabolites formed and released by pine trees (Claeys et al. 2007). Unsurprisingly, in humans and other mammals, the synthesis of 3-hydroxyglutaric acid takes a very different path, as discussed below.

There isn’t a plethora of research on the origins of 3-hydroxyglutaric acid in mammals. In humans, 3-hydroxyglutaric acid levels increase when the enzyme glutaryl-CoA dehydrogenase (GCDH) is deficient (see below). GCDH is involved in the catabolism of the amino acids lysine and tryptophan, as well as hydroxylysine that is formed during post-translational modification of cellular proteins (Leandro 2020).

Both lysine and tryptophan are essential amino acids, sourced exclusively from the food we ingest. Following different catabolic paths, both converge onto 2-oxoadipic acid, the precursor of glutaryl-CoA. The conversion of glutaryl-CoA to crotonyl-CoA by GCDH enables their further conversion into acetyl-CoA. This provides carbons for the tricarboxylic acid cycle (TCA), a function served by many amino acids.

A recent hypothesis suggests that the mitochondrial enzyme medium chain acyl-CoA dehydrogenase converts glutaryl-CoA to glutaconyl-CoA, followed by the formation of 3-hydroxyglutaryl-CoA by 3-methylglutaconyl-CoA hydratase. 3-hydroxyglutaric acid would then be formed by hydrolysis of its CoA-bound precursor (Peters et al. 2019).

This metabolite is best known as a biomarker of glutaric aciduria type 1 (GA1), a rare condition that disrupts amino acid degradation. This genetic disorder is caused by mutations in the gene that encodes GCDH, leading to GCDH deficiency. GCDH is a flavoprotein that catalyzes the oxidative decarboxylation of glutaryl-CoA into crotonyl-CoA and carbon dioxide.

GCDH malfunction classically results in an accumulation of downstream metabolites of the unused substrate (glutaryl-CoA). Four metabolites constitute the primary markers of the disease: glutaric acid, 3-hydroxyglutaric acid, glutaconic acid and glutarylcarnitine (C5-DC). Diagnosis is supported by the measurement of these metabolites in urine and/or blood at birth or in infancy, when the disease is usually identified.

The prevalence of GA1 is estimated between 1:90,000 and 1:120,000 births worldwide. Certain sub-populations in the USA (Pennsylvania and North Carolina), Canada (Manitoba and West Ontario), Ireland, the UK and South Africa exhibit a much higher incidence or carrier frequency than the general population (Boy et al. 2022).

Newborn screening is an efficient way to identify the disease before diagnosis is confirmed by genotyping. It is not without pitfalls however, and a diagnosis based on the C5-DC to carnitine ratio alone can miss a sub-group of GA1 patients, termed “low excreters,” who have mild to non affected C5-DC blood levels (Boy et al. 2022).

Although the levels of 3-hydroxyglutaric acid are severely elevated in blood and CSF, changes in urine are milder and less specific to GA1. Other disorders, particularly those linked to mitochondrial dysfunction, can also result in elevated urinary levels of 3-hydroxyglutaric acid. A few cases of misdiagnosis have been reported, demonstrating that differential diagnosis is not trivial (Boy et al. 2022).

Treatment is focused on intervention at the metabolic level. Diets poor in lysine and tryptophan have a direct effect, but supplementation with other metabolites allows to indirectly contribute to a positive outcome. Recommendations include supplementation with an amino acid mixture low in lysine, reduced in tryptophan and enriched in arginine (Boy et al. 2022). Arginine supplementation (or fortification) limits the cerebral influx of lysine, thus reducing the impact of faulty lysine degradation in the brain. Indeed, lysine and arginine share common amino acid transporters in the blood-brain barrier (BBB) (Zaragozá 2020).

Carnitine supplementation helps to restore depleted carnitine stores, as carnitine serves to detoxify the cell of excessive organic acids, for example, by forming C5-DC (Guerreiro et al. 2019). A diet that’s low in meat, a source of both lysine and carnitine, also likely contributes to carnitine deficiency as a secondary sign of GA1. Metabolic treatment has been shown to considerably reduce the frequency of acute encephalopathic crises and movement disorders.

GA1 can lead to severe neurological manifestations that can be transient or leave irreversible damage. Acute encephalopathic crises lead to dyskinesia, dystonia and other motor complications, and more rarely to cognitive impairment, developmental regression and coma. At the tissue level, acute encephalopathic crises that occur in the early years of life can leave lesions, particularly in the striatum, a region of the brain linked to motor functions and the reward system (Harting et al. 2009).

A sodium/carboxylate transporter (NaC3) expressed by endothelial cells enables limited entry of 3-hydroxyglutaric acid in the brain (Sauer et al. 2010; Hagos et al. 2008). In a mouse model of GA1, inducing encephalopathic crises did not increase BBB permeability for 3-hydroxyglutaric acid, suggesting that the metabolite accumulates due to increased synthesis within the brain (Keyser et al. 2008).

These findings suggest that the discovery of the signaling roles of 3-hydroxyglutaric acid may still be ahead of us, for example by enhancing the action of more potent signaling molecules.

Harting I. et al.: Dynamic Changes of Striatal and Extrastriatal Abnormalities in Glutaric Aciduria Type I (2009) Brain : A Journal of Neurology | http://doi.org/10.1093/brain/awp112

Keyser B. et al.: Transport and Distribution of 3-Hydroxy Glutaric Acid Before and During Induced Encephalopathic Crises in a Mouse Model of Glutaric Aciduria Type 1 (2008) Biochimica et Biophysica Acta | http://doi.org/10.1016/j.bbadis.2008.02.008