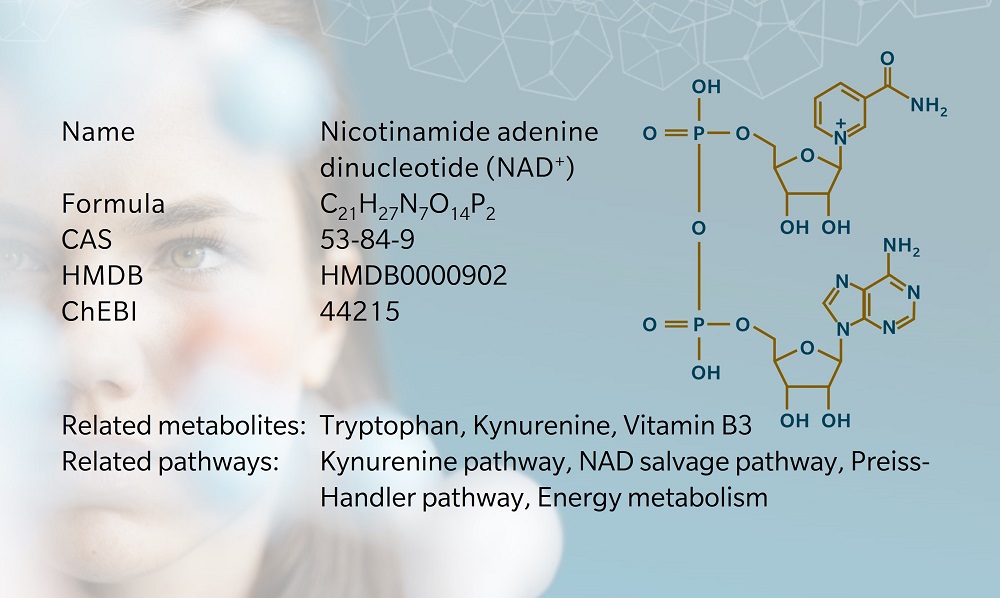 For this article, we welcome as a guest author Sofia Moco of the Vrije Universiteit Amsterdam who kindly contributed her expertise on her favorite metabolite.

NAD+ was initially described as a ‘coferment’ by Arthur Harden and William John Young, who discovered that it accelerated the rate of alcoholic fermentation when they were studying yeast fermentation in the early 20th century (Harden and Young 1906).

Hans von Euler-Chelpin would later identify important chemical features of NAD+, such as the presence of a sugar, adenine and phosphate (Euler 1929).

Von Euler-Chelpin and Harden shared the Nobel Prize of Chemistry in 1929 for “their investigations on the fermentation of sugar and fermentative enzymes”, which included their pioneering work on what they coined ‘cozymase’ (NAD+).

In his acceptance speech, von Euler-Chelpin said ‘…cozymase is one of the most widespread and biologically most important activators within the plant and animal world’ (Euler 1929). In 1936, another Nobel Prize laureate, Otto Heinrich Warburg, identified the pyridine ring as the hydrogen-transferring moiety of NAD+ (Warburg and Christian 1936). This was later shown to play a critical role in redox reactions and metabolism.

The structural features of NAD+ were uncovered over the years through a combination of available techniques, including elemental analysis, enzymology, ultraviolet absorbance, isotopes and mass spectrometry (LePage 1947; Mauzerall and Westheimer 1955; Pullman et al. 1954; Siegel et al. 1959).

The first nuclear magnetic resonance spectra of diphosphopyridine nucleotide (DNP, a former name given to NAD+) and its derivatives were recorded in the 1960s, using a 40 MHz spectrometer (Jardetzky and Wade-Jardetzky 1966; Jardetzky et al. 1963).

Nicotinamide adenine dinucleotide is found in virtually all living cells in the micromolar range. Levels of NAD+ are lower in the cytosol than in the nucleus and mitochondria (Xie et al. 2020). The NAD+/NADH ratio greatly differs according to cell type and condition (NADH being the reduced form of NAD+).

Whilst NAD+ is an indispensable metabolite, the biosynthetic turnover is likely to differ in different tissues, as observed in animal studies (Liu et al. 2018).

While NAD+ is not directly absorbed from food, it can be synthesized via three main pathways in humans (Giner et al. 2021):

Both niacin and nicotinamide belong to the vitamin B3 family that was discovered as a precursor of NAD+ in the late 1930s (Elvehjem et al. 1974). Humans source vitamin B3 from food, with the dietary recommendation in both EU and USA set at 1.3–1.6 mg per megajoule.

Vitamin B3 deficiency is generally associated with malnutrition and causes pellagra, first identified as a skin condition in 1735. The symptoms of pellagra are described by the 4Ds: diarrhea, dermatitis, dementia and death. Pellagra became more prevalent as consumption of maize, which is low in niacin, increased (Cantó et al. 2015).

Aztecs and Mayans would pre-treat maize with alkali, which increased niacin bioavailability, made the corn easier to handle and removed mycotoxins. A diet rich in untreated maize can easily lead to pellagra due to lack of nutrients.

Another precursor of NAD+ is tryptophan, an essential amino acid found in a variety of protein-rich dietary sources. This was discovered through a nutritional study, where the amino acid was shown to be capable of replacing niacin in vitamin B3-deficient individuals (Krehl et al. 1945). De novo NAD+ synthesis occurs via the kynurenine pathway, with quinolinic acid as an intermediate.

Given its lengthy metabolic path towards nicotinamide adenine dinucleotide and the multiple routes that can divert tryptophan from NAD+ production, tryptophan is a less prominent precursor of NAD+.

While different precursors lead to increased levels of NAD+, each precursor has a unique pharmaco-kinetic and dynamic profile, which in turn influences its bio-efficacy. They also produce and excrete different sets of catabolites.

NAD+ and its role in metabolism

NAD+ is best known as a cofactor that enables redox reactions, but it also acts as a signaling molecule and as a substrate in post-translational modification of proteins.

The oxidized form (NAD+) and reduced form (NADH) make up a coenzyme pair that participates in hundreds of metabolic reactions, acting as a cofactor in redox reactions. NAD+/NADH have crucial roles in central metabolic processes essential in the production of cellular energy.

In glycolysis and in the tricarboxylic acid (TCA) cycle, NAD+ is reduced to NADH, which provides protons to the mitochondrial respiratory chain for oxidative phosphorylation, by which adenosine 5′-triphosphate (ATP) is generated.

The discovery of the non-redox role of NAD+ dates back to the 1960s. nicotinamide adenine dinucleotide was identified as a mediator of ADP-ribosylation, a type of post-translational modification of proteins involved in processes such as cell signaling, gene expression, cellular repair, proteostasis and circadian rhythm (Chambon et al. 1963).

NAD+ levels can drop due to a decrease in the NAD+/NADH ratio (NADH is not oxidized back to NAD+) or because the overall NAD concentration decreases in the cell.

NAD+ levels decrease with age. In aging muscle, NAD+ levels are depleted compared to younger individuals (Janssens et al. 2022). This progressive erosion of NAD+ is associated with age-related diseases such as neurodegenerative diseases and cancers. Reciprocally, restoration of NAD+ metabolism and levels has shown positive effects on the same pathologies, as reviewed by Yaku et al. (2018).

This drop in NAD+ levels directly impacts the activity of enzymes like sirtuins and PARPs. Interestingly, this decrease also coincides with an increase in expression and activity of CD38, a NAD+ degradation enzyme, or NADase (Camacho-Pereira et al. 2016).

Upon CD38 inhibition and in knockout animals, nicotinamide adenine dinucleotide levels are higher than in wild type and improve glucose and lipid homeostasis (Schultz and Sinclair 2016; Escande et al. 2013).

While ageing is overall a natural process, there are factors that can accelerate it. Thus, biological age and actual age don’t always match. Since NAD+ levels associate with several age-related diseases, this brings about the question: is this NAD+ decrease a cause or a consequence of (accelerated) ageing?

Anti-ageing therapies aimed at increasing NAD+ levels suggest that it is at least a factor that can be modulated. Interestingly, lifestyle changes that reduce the energy load such as fasting, glucose deprivation, dietary restriction and exercise, typically increase the levels of oxidized NAD+.

NAD(H) is essential for the respiratory chain of mitochondria where ATP is generated via oxidative phosphorylation. Thus, a well-functioning NAD system is essential for cells with high energy demands, such as highly proliferative cancer cells. This has prompted the search for targeted approaches aimed at lowering NAD+ levels in cancer cells.

Since much of the newly synthetized nicotinamide adenine dinucleotide comes from the salvage pathway, the inhibition of the enzyme nicotinamide phosphoribosyltransferase (NAMPT) has been a therapeutic target of choice, albeit without much efficacy in the clinics so far (Ghanem et al. 2021). Even if the therapy targets cancer cells, NAD+ does not act solely as a redox cofactor; it is also a substrate for protective mechanisms against cancer.

For example, PARP enzymes consume the NAD+ generated by NAMPT in the salvage pathway to support DNA repair mechanisms. Thus, when the pathway is blocked and NAD+ levels drop, DNA damage is more difficult to control and mutations are more likely to arise (Xie et al. 2020; Ghanem et al. 2021).

A decrease in NAD+/NADH ratio has been associated with diabetes (Song et al. 2019). This situation, termed “pseudohypoxia”, occurs in both type 1 and type 2 diabetes animal models via different mechanisms (Fan et al. 2020).

In each case, NADH is not oxidized to NAD+, leading to a drop in NAD+ levels and NADH accumulation. This results in redox imbalance and reductive stress, leading to oxidative stress and cellular damage over time. Interestingly, this seems to occur in the cytosol but not in mitochondria.

In the heart, nicotinamide adenine dinucleotide imbalance exacerbated diabetic cardiopathy in a diabetic mouse model (Chiao et al. 2021). Another characteristic of pseudohypoxia in diabetes is an impairment of the salvage pathway further contributing to the lack of NAD+ (Fan et al. 2020).

Our Technology
More metabolites of the month