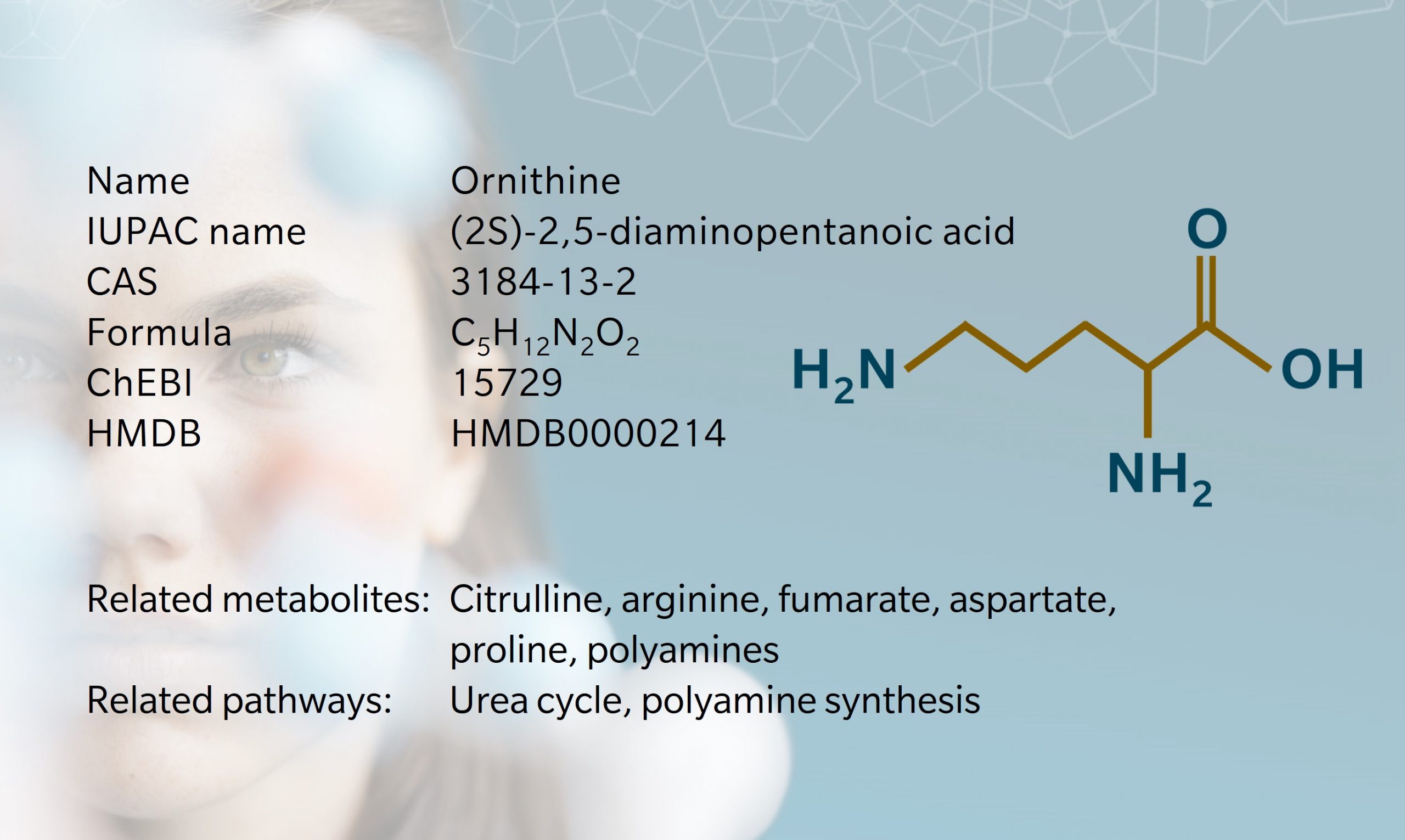 Metabolite of the month – Ornithine

Ornithine is a non-essential, non-proteinogenic amino acid that plays an essential role in the urea cycle. It was first isolated from chicken excrement in 1877 by Jaffé, who found that hens excrete ornithine after consuming benzoic acid (Jaffe 1877, Crowdle 1923). The metabolite takes its name from this association with birds.

In 1932, Hans Krebs (after whom the famous “Krebs cycle” is named) who was working with his student Kurt Henseleit at the time in the lab of Otto Warburg (of the just as famous “Warburg effect”) identified the processes of urea production in mammals (Krebs 1973, Da Poian et al. 2022). While the notion of metabolic cycles had been recognized for a while, the urea cycle – also called ornithine cycle, was the first to be thoroughly described. Interestingly, the stages leading up to this discovery are pretty well-recorded, as the complete laboratory notebooks of both Krebs and Henseleit have been preserved.

Ornithine is a precursor of several metabolites including arginine, proline, citrulline and polyamines. Due to its role in the urea cycle, it’s associated with diseases including hyperornithinemia, hyperammonemia, gyrate atrophy (an ocular disease) and cancer.

In humans and other mammals, ornithine is also synthesized from arginine in the urea cycle. Arginine can be generated from citrulline, itself coming from glutamine metabolism. Proline can also be a precursor for ornithine synthesis (Ginguay et al. 2017).

The urea cycle is a metabolic cycle present in all ureotelic organisms (including humans and other mammals, but not birds or reptiles) that eliminates excess nitrogen and toxic ammonia from the organism as urea. Also known as the ornithine cycle, this process takes place primarily in the liver and pools two amino groups collected from ammonia and aspartate into one molecule of urea through five reactions. The first two occur in the mitochondria and the next three in the cytosol.

Citrulline then leaves the mitochondria and enters the cytosol, where it is condensed with a molecule of aspartate (also an amino group carrier) by argininosuccinate synthetase, forming argininosuccinate, the first metabolite of the cycle containing two nitrogen atoms. This metabolite is cleaved by argininosuccinase to form fumarate and arginine. Finally, arginine undergoes cleavage by arginase, forming urea and ornithine. The ornithine is transported back to the mitochondria using a broad set of transporters that includes an ornithine/citrulline exchanger to start the cycle again, while urea (rich in two amino groups) travels to the kidneys to be excreted through urine.

While potentially every tissue has arginase and could complete the cycle, only the liver has an abundance of all the cycle’s enzymes, especially CPSI and OTC. Therefore, the urea cycle takes place primarily in the liver and, to a lesser extent, in the kidneys (Sivashanmugam et al 2017). Note that ornithine acts as a catalyst in this cycle and is recycled once urea is generated. It is also one of the two metabolites of the cycle that needs to travel between cytosol and mitochondria to complete the steps where it plays a role. Thus, conditions affecting ornithine transport have a large impact on the urea cycle’s efficiency and can result in ammonia intoxication (Martinelli et al. 2015).

Ornithine is also involved in the polyamines pathway. Its decarboxylation is catalyzed by ornithine decarboxylase (ODC) to generate putrescine, the precursor of spermidine and spermine (Li et al. 2020). These polyamines pack two to four amine groups and can serve as regulators of cellular signaling, translation, and metabolism (Pegg 2016).

Taking ornithine supplements may have therapeutic benefits for several diseases. For instance, one study found that supplementing with ornithine improved symptoms in participants who had previously been diagnosed with chronic fatigue syndrome (Armstrong et al. 2012).

Since the urea cycle is prevalent in the liver, several studies have investigated a potential therapeutic role for ornithine and arginine in the treatment of hepatic disorders. A multicenter randomized clinical trial found that 12 weeks of oral L-ornithine L-aspartate (LOLA) (6-9 g/d) therapy had hepatoprotective properties in individuals with non-alcoholic fatty liver disease (NAFLD) (Butterworth, R and Canbay, A 2019). Specifically, it resulted in a dose-related effect on triglycerides levels and clinical markers of hepatic health.

Supplementing with ornithine may also help improve hepatic encephalopathy, a neurological disorder that often occurs as a result of cirrhosis with high mortality and morbidity. Ornithine is thought to help by reducing the accumulation of ammonia, which is one of the causative factors in hepatic encephalopathy (Goh et al. 2018).

Urea cycle disorders generally affect the nervous system via ammonia intoxication, with common symptoms including brain oedema, seizures, coma or death. Hyperammoneamia (or the overt accumulation of ammonia in the blood) causes activation of the NMDA receptor linked to excitotoxicity in neurons (see Gropman et al. 2007 for a review).

Ornithine and its associated metabolic products appear to have a role in tumor growth, according to in vivo and in vitro studies. Specifically, several efforts have been put into the inhibition of ODC, a pyridoxal phosphate-dependent enzyme that is the rate-limiting enzyme for polyamine synthesis. The activity of ODC in cancer cells is reported to be consistently increased, and ODC is currently being studied as a therapeutic target for different types of cancer, including neuroblastoma (Chai et al 2020).

A multi-omics analysis demonstrated an inverse correlation between ODC expression in pancreatic cancer cells and sensitivity to chemotherapeutics (Jang et al 2017). While more research is needed, these findings could support the identification of therapeutic markers in cancer.

Ornithine transcarbamylase (OTC) deficiency is a genetic disorder primarily characterized by the body’s inability to process the ammonia generated by the break down of proteins. This leads to ammonia accumulation in the blood, causing complications from toxicity to the nervous system. As the OTC gene is X-linked, severe symptoms are primarily observed in males, starting in infancy. A less frequent form of the disease can appear in adulthood in both males and females. The condition is typically diagnosed at birth via newborn screening and genetic testing.