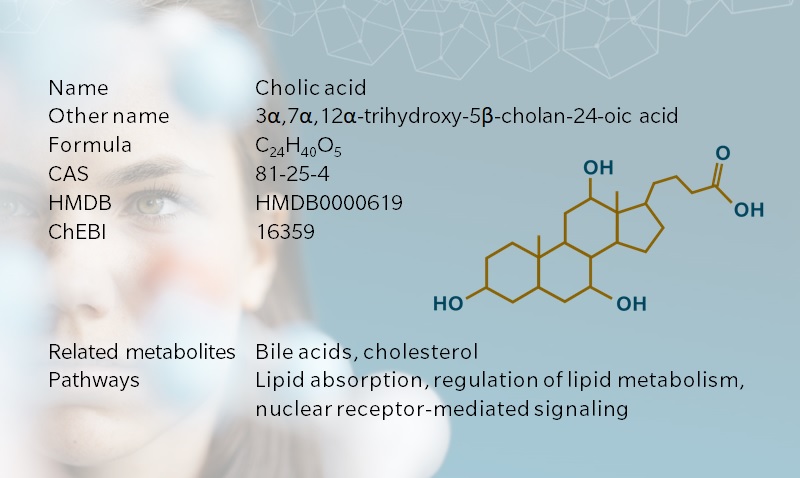 Metabolite of the month – Cholic acid

Cholic acid, from the Greek khole, meaning bile, is a primary bile acid synthesized in the liver of humans and other vertebrates. Together with other bile acids and bile salts, cholic acid contributes to the absorption of lipophilic nutrients in the intestine. Cholic acid also has a prominent role in the regulation of bile acid metabolism. As for many bile acids, the role of cholic acid in nuclear receptor-mediated signaling has become a hot topic in recent years, bringing new momentum to bile acid research.

In humans, cholic acid is synthesized from cholesterol in the liver by cytochromes P450 7A1, 8B1 and 27A1. Cholesterol is conjugated to glycine or taurine to form bile salts, which are secreted in the small intestine to aid the digestion and absorption of fat and other lipophilic nutrients. In the “classical pathway” of bile acid synthesis, cholic acid produces bile acid metabolites, leading to the production of deoxycholic acid (or DCA, a secondary bile acid), and glycine and taurine conjugates.

Only a fraction of bile acids is estimated to be excreted in feces. The rest (both conjugated and unconjugated) are reabsorbed, returning to the liver via the enterohepatic circulation to be processed for reuse in digestion (Hofmann and Hagey 2014).

Cholic acid in health and disease

Cholic acid plays an important role in digestion, both as a precursor of several bile acids and bile salts, and as a regulator of bile acids and lipid metabolism. Mutations in the genes encoding enzymes involved in bile acid biosynthesis are rare, but result in serious pathologies involving the liver, kidneys and brain. They can also cause deficiencies due to the malabsorption of vitamins and other nutrients (Sundaram et al. 2008). Cholic acid has been successfully applied to the treatment of genetic diseases resulting in primary bile acid synthesis defects (Gonzales et al. 2018). As an inhibitor of bile acid synthesis (Lu et al. 2000), cholic acid has also been used to suppress this pathway in order to reduce the amount of toxic bile acids produced in the liver of patients with Zellweger spectrum disorders (Berendse et al. 2016).

Cholic acid as a signaling molecule

As molecular biology and genomics progressed, research has revealed that bile acids play an important role in gene and metabolism regulation. In 1999, researchers discovered their capacity to bind nuclear receptors and therefore regulate gene expression (Makishima et al. 1999; Parks et al. 1999; Wang et al. 1999). This allows bile acids to act on their own homeostasis (metabolism and transport), on cholesterol synthesis, and on energy metabolism from both lipids and glucose.

A notable bile acid receptor is the farnesoid X receptor (FXR), the first nuclear receptor found to mediate bile acid signaling. Interestingly, cholic acid was first thought to have no-to-low capacity for FXR activation. However, that assumption was based on experiments performed in cell models that did not express membrane transporters allowing the entry of hydrophilic bile acids, such as cholic acid. It was later demonstrated in  other models that cholic acid was one of the bile acids that can activate FXR (Wang et al. 1999). In 2002, the G protein-coupled receptor, TGR5, expressed at the cell surface, was discovered as a mediator of bile acid signaling within cells (Maruyama et al. 2002). TGR5 activation can trigger anti-inflammatory signaling, influence liver and gallbladder functions, modulate thyroxine metabolism, and play a critical role in energy homeostasis (Duboc et al. 2014). Cholic acid is an agonist of TGR5, though less so than DCA or secondary bile acids (Kawamata et al. 2003).

Cholic acid and the brain

With their newly found effect as nuclear receptor ligands, bile acids have received a lot more attention in the neurology field in the last decade. Bile acids can act directly on receptors present in the brain, or can trigger signals via growth factors and hormones that act on the CNS (Mertens et al. 2017). Both conjugated and unconjugated bile acids have been shown to cross the blood-brain-barrier.

A recent study in rats concluded that cholic acid and other unconjugated bile acids are present in brain tissue at the same concentrations as in the circulation, suggesting passive diffusion of these lipophilic bile acids (Higashi et al. 2017). More hydrophilic forms are thought to be transported in the brain via active bile acid transporters similar to those found in other organs (Mertens et al. 2017). In 2019, metabolomics revealed that the bile acid profile in serum samples from patients with Alzheimer’s disease (AD) is associated with clinical biomarkers of AD (Nho et al. 2018). Cholic acid levels were found to be lower in AD patients, while the ratios of DCA to cholic acid, indicative of dysbiosis of the intestinal microbiome, was associated with cognitive decline (MahmoudianDehkordi et al. 2019).

Cholic acid and the microbiome

Back to HOME
Decide which metabolite comes next