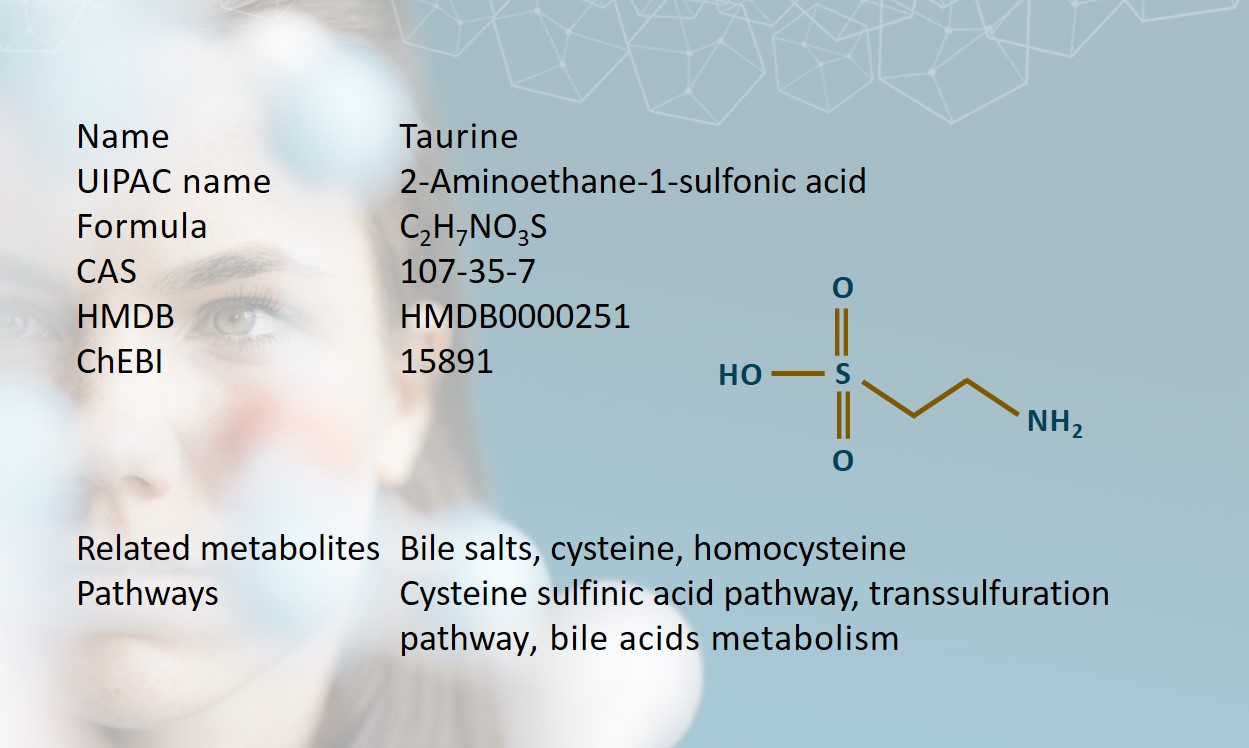 Metabolite of the month – Taurine

Taurine is an aminosulfonic acid with high intracellular concentrations in the brain, retina, heart, skeletal muscles, and leukocytes in humans (Bayarmaa et al., 2013; Lourenço et al., 2002). It was first isolated from ox bile in 1827 by two German scientists, Friedrich Tiedemann and Leopold Gmelin (Tiedemann et al., 1827). Referencing this, taurine gets its name from the Latin taurus, meaning bull or ox.

Over the following decades, studies revealed the presence of taurine in animal bile and muscle tissue, including human bile in 1846 (Ronalds et al., 2019). Taurine does not appear to be present to the same degree in plants (Jacobsen et al., 1968; Hou et al., 2019).

Taurine is considered a “conditionally” essential amino acid, due to its lack of involvement in protein synthesis. However, given its significant role in many biological processes including bile salt formation, osmoregulation, antioxidation, retinal development, and the central nervous and cardiovascular systems, its presence in the body appears very much essential (Ripps et al., 2012; Stapleton et al., 1998).

Taurine is derived from the conditionally essential amino acid, cysteine, which is a product of methionine catabolism. Unlike other amino acids, taurine contains a sulfide group instead of a carboxyl group, which makes it an amino sulfonic acid. Taurine is synthesized in humans in the liver via two pathways:

Most taurine is obtained through diet and absorbed in the small intestine. It is transported to the liver and released into the blood stream, then enters cells throughout the body via the taurine transporter (TauT). Excess taurine is excreted through urine or conjugated to bile acids.

Meat and fish are good sources of taurine, and a diet containing animal products usually contains sufficient taurine for physiological needs. People following vegetarian or vegan diets have been shown to have lower levels of taurine in plasma (Laidlaw et al., 1988). Because of taurine’s role in retinal and brain development, children who consume diets low in animal protein may need to supplement their taurine intake (Wójcik et al., 2010).

Premature infants are vulnerable to taurine deficiency because they lack the enzymes needed to synthesize cysteine. Human breast milk contains high levels of taurine which is sufficient for newborns. Formula milk is often supplemented with taurine, though evidence is mixed as to whether this is beneficial or not (Chawla et al., 2018).

Taurine is a common ingredient in energy drinks, though since many of these also include high levels of caffeine, it’s not clear whether any perceived energy boost is attributable to taurine.

Taurine as a regulator of cellular function

Taurine’s role varies according to cell type (Stapleton et al., 1998). In the central nervous system, taurine functions as an intracellular osmolyte, regulating cell volume and stabilizing cell membranes, and its presence is important for optimal cell development in the brain, retina, skeletal muscle, and other organs (Stapleton et al., 1998). Deficiency is associated with cardiomyopathy, renal and pancreatic dysfunction, retinal damage, and diabetes.

Taurine also acts as an antioxidant: concentration is particularly high in cells exposed to oxidative stress, and deficiency is linked with cell death (Jong et al., 2013). However, taurine is not a scavenger of free radicals, and the precise mechanism of antioxidant action is unclear. One known process involves a toxicity-suppressing reaction with halogenating agents such as hypochlorous acid, but taurine has demonstrated a protective effect in cells where these agents are absent (Marcinkiewicz et al., 2014). While there is no confirmed link between taurine deficiency and immunodeficiency, its broad cytoprotective properties suggest therapeutic potential (Marcinkiewicz et al., 2014; Schaffer et al., 2018).

Taurine’s main function is the conjugation of cholesterol into bile acids. Bile acids are conjugated with taurine or glycine at a ratio of about 1:3, to form bile salts, which in turn form mixed micelles with phospholipids and cholesterol (Chiang, 2013). These are stored in the gallbladder and secreted to ease digestion and nutrient absorption.

Studies show links between a high fat diet, increased taurine conjugation and bile pool size and composition. Bilophila, a bacterium that thrives in bile, has been shown to use the sulfite in taurine as a terminal electron acceptor, allowing it to proliferate in the gut (Ridlon et al., 2014). This also helps to explain the link between diets high in red meat and increased risk of colorectal cancer. When gut microbes metabolize taurine-conjugated bile acids, hydrogen sulfide and deoxycholic are produced, which are both associated with tumor growth in the colon (Ridlon et al., 2014).

However, taurine has also been shown to have a protective effect on the microbiome, which could help address over-reliance on antibiotics. One study found that taurine levels influence pathogen colonization in the gut, and that a mild infection can prompt the liver and gallbladder to draw on taurine-conjugated bile acids to strengthen the microbiome and promote resistance to further infection (Stacy et al., 2021). This has exciting implications for microbiota-based therapeutics.

Taurine is found in high levels in the brain. It plays a major role in brain development, including neuronal and stem cell proliferation (Li X.W. et al., 2017). These levels seem to decrease with age, prompting investigation of taurine’s relationship to neurodegenerative diseases such as Alzheimer’s, Huntington’s, and Parkinson’s (Schaffer et al., 2018).

Disruptions in taurine homeostasis have also been linked to neurological conditions including epilepsy and autism. As a membrane stabilizer, taurine appears to modulate hyper reactivity of cells in epilepsy. Isothionic acid, a metabolite of taurine, is linked with more frequent seizures (Kothandam, 2012). Taurine stimulates GABA receptors, which increase inhibitory actions in the limbic system, and are shown to reduce susceptibility to seizures in rodent models (El Idrissi A. et al., 2003).

Emerging findings suggest a link between the gut-brain axis and autism spectrum disorder. A study of human subjects using a novel mass spectrometry metabolomic profiling method found that individuals with ASD had consistently high levels of taurine in plasma, suggesting its potential as a biomarker for ASD (Kuwabara et al., 2013).

Taurine’s role in the prevention, development and treatment of diabetes has been widely studied. Evidence suggests taurine supplementation can be effective against type 1 diabetes, type 2 diabetes mellitus and metabolic syndrome, as well as some common diabetic complications (Ito T. et al., 2012). However, most studies have been conducted in rodent models, and more research is needed to understand the therapeutic effect of taurine in chronic diabetes.

Taurine has been shown to influence several types of kidney disease, including renal failure, acute kidney injury, glomerulonephritis, and diabetic nephropathy. As with diabetes, most investigations have been conducted on animal models, but taurine’s confirmed role in regulating blood flow, cell volume, and oxidative stress suggests a protective effect (Chesney et al., 2010).

Taurine and the eyes

The retina is the most taurine-rich organ in the body, containing more taurine than any other amino acid (Castelli et al., 2021). Oxidative stress is a major cause of retinal degenerative diseases, which makes taurine a therapeutic candidate. The discovery that the anti-epileptic drug, vigabatrin, caused retinal degeneration and taurine deficiency prompted investigation of the links between taurine and retinal disease. Low levels of taurine in plasma of diabetic patients have been linked to diabetic retinopathy (Froger et al., 2014).

Explore other Metabolites of the month
Back to HOME