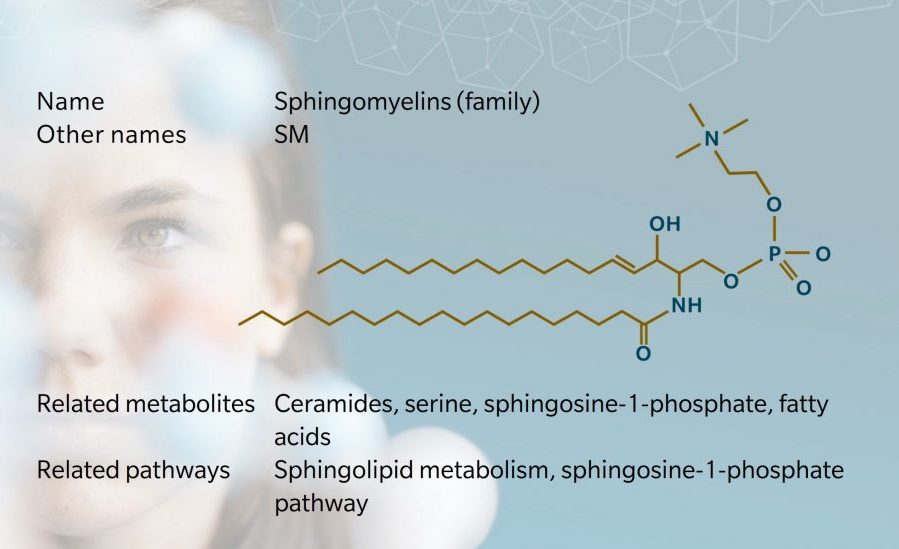 Metabolite of the month – Sphingomyelins

Sphingomyelins (SMs) are a type of complex sphingolipid, which are building blocks of eukaryotic cell membranes (Maceyka et al. 2014).

Sphingolipids, discovered in the 1870s by German scientist Johann Thudicum, derive their name from the Egyptian sphinx, because of their mysterious nature (Olson et al 2016). Thudicum first isolated sphingomyelins (SM) in brain tissue in the 1880s (Ramstedt et al. 2002). Their structure was later identified as N-acyl-sphingosine-1-phosphorylcholine.

Beyond contributing to the structure and properties of membranes, SMs are precursors to several lipid second messengers, and play an important role in cell signaling, growth and survival (Maceyka et al. 2014).

The overall shape of lipids dictates membrane fluidity. SMs are shaped like a cylinder, with a hydrophilic head and hydrophobic tails. The first five carbon atoms on the sphingoid base are known as the ‘sphingoid motif’, present in all sphingolipids (Dingjan et al. 2021). This determines how the molecule interacts with other lipids.

As with triglycerides, scientific nomenclature for SMs varies, with the name usually based on the name of the sphingoid base and the fatty acid. At biocrates, we use a nomenclature where the name of the SM corresponds to the entire sphingosine backbone, denoting the number of carbons and double bonds in the fatty acid. For example, SM C18:0 indicates a fatty chain with 18 carbon atoms and no double bonds. We also include a reference to hydroxylation where relevant, such as SM (OH) C22:1.

De novo synthesis of SM follows a series of enzymatic reactions in the gut, all taking place at the surface of the endoplasmic reticulum. Serine and palmitoyl-CoA combine to produce a ceramide precursor with an additional fatty acyl group. The ceramide is then transported to the Golgi and converted to SM by SM synthase. A diacylglycerol (DAG) is produced as a by-product.

Experiments have shown that dietary supplementation with high levels of sphingolipids could increase circulating SMs, though diet is not the main source of SMs. Because sphingolipids are found in mammal cells, they’re particularly prevalent in diets containing meat, eggs and dairy. Western diets are estimated to contain 200–400mg per day of sphingolipids, with the majority being SM (Norris et al. 2017). During digestion, gut enzymes break down the SM into ceramide and phosphorylcholine. The ceramide may be further converted to produce sphingosine, which can be absorbed by cells and enter the sphingosine-1-phosphate (S1P) pathway (Norris et al. 2017). Animal studies have shown that dietary SM is important for newborn gut development (Norris et al. 2017).

Most dietary SMs are degraded in the gut by glucoceramidases, sphingomyelinases, and ceramidases, and around a quarter are secreted in feces in the form of ceramide.

Several metabolomic investigations into sex-based differences in the human blood metabolome have focused on SMs. In humans, SMs are commonly found in higher amounts in the blood of females compared to males.

A 2011 study found that concentrations of SMs were significantly lower in men than women (Mittelstrass et al. 2011). SMs and ceramides were found to play a role in a range of chronic disease processes, including atherosclerosis, coronary heart disease and type 2 diabetes. Like other sex differences in metabolism, this suggests that SM concentrations could contribute to the difference in susceptibility between the two sexes for many chronic diseases.

A more recent study of 1212 individuals investigated sex differences in SMs by age. This showed that sphingolipids tended to increase in women and decrease in men with age (Darst et al. 2019). Of 40 sphingolipids tested, 35 were found in higher amounts in women than in men. Aging also appeared to influence a wider range of analytes in women than in men. Post-menopausal women had higher levels of SMs. Interestingly, women with high levels of SMs appear to have a lower risk of AD, while men with high levels of SM have a higher risk of AD, which is not yet fully understood.

SMs are important components of the myelin sheath which surrounds nerve cell axons, which makes them particularly interesting in the exploration of diseases related to the central nervous system and brain physiopathology (Signorelli et al. 2021).

For example, myelin breakdown is a core feature of Parkinson’s disease (PD) pathology (Signorelli et al. 2021). Various metabolomic studies have sought to gather insights into the signaling mechanisms of SMs in PD. Reducing acid sphingomyelinase has been shown to cause an accumulation of SMs, which is toxic to cells, eventually leading to loss of neuronal plasticity and neurogenesis. A study of mouse embryonic stem cells showed that an accumulation of SM impaired neural differentiation, suggesting that simulating stem cell differentiation through the SM pathway may be a way to inhibit PD progression (Fan et al. 2021).

SMs are also relevant to our understanding of major depressive disorder (MDD). Recent studies have shown that concentrations of sphingolipids in the hippocampus, particularly ceramides, can influence the effect of anti-depressants (Gulbins et al. 2015). Depression can occur when negative stimuli in the hippocampus outweigh positive stimuli. Inhibiting the activity of acid sphingomyelinase with anti-depressants has been found to reduce ceramide load, and therefore reduce negative stimuli.

Ceramides and S1P have been shown to regulate brain cell survival and participate in the pathogenesis of multiple sclerosis (MS). This autoimmune disease causes degradation of the myelin sheath in cells in the brain and spinal cord. Studies have shown that activating the neutral sphingomyelinase–ceramide pathway via oxidative stress mechanisms could lead to the death of oligodendrocytes, which influence MS symptoms. Similarly, inhibiting antagonists of S1P receptors involved in autoimmune processes could limit neuroinflammation and demyelination in MS (Jana et al. 2010).

Accumulation of sphingolipids has been demonstrated in humans and animals with obesity, which is associated with many metabolic diseases (Holland et al. 2008). Sphingolipids have been shown to influence cellular activity leading to insulin resistance, pancreatic disease, cardiomyopathy, and vascular disease. More recently, inhibition of enzymatic sphingolipid synthesis has been shown to limit insulin resistance, diabetes, and atherosclerosis (Holland et al. 2008).

Animal studies have also shown that dietary sphingolipids affect cholesterol absorption, which is of interest in the study of inflammatory bowel disease and colon cancer. Dietary SM has been shown to exert chemo preventive and chemotherapeutic effects in rodent with colon cancer (Yamashita et al. 2021).

Sphingomyelin has been identified in human studies as an independent risk factor for atherosclerosis (Yu et al. 2019). However, the mechanisms are not well understood, and other studies have found long chain saturated sphingomyelins to have a protective effect on cardiovascular health (Sigruener et al. 2014).

Explore more Metabolites of the month
Back to HOME