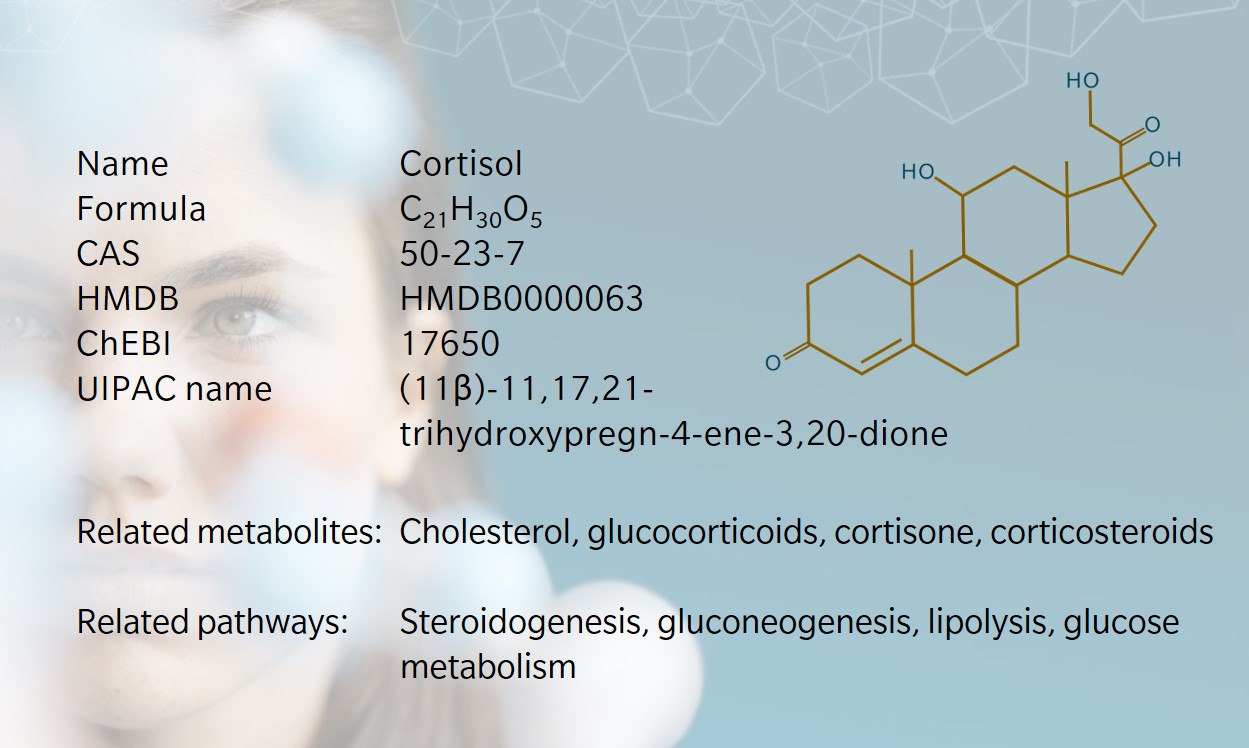 Metabolite of the month – Cortisol

by Louise | May 10, 2022 | Blog, Cardiometabolic disease, Literature, Metabolite of the month

Cortisol’s story begins in the mid 19th century, when British physicist Thomas Addison established the role of the adrenal cortex and first described symptoms of adrenal deficiency, now known as Addison’s disease (Timmermans et al. 2019). In 1937, Tadeus Reichstein isolated cortisol from the adrenal glands. A decade later, rheumatologist Philip Hench showed that cortisol, and specifically its derivative cortisone, could be used to treat rheumatoid arthritis and other inflammatory conditions. Reichstein and Hench (and fellow researcher Edward Kendall) were jointly awarded a Nobel Prize in 1950 for their discoveries.

Cortisol is a glucocorticoid steroid hormone, released by the adrenal glands in response to biochemical stress. Cortisol gets bad press as the body’s “stress hormone”, but without an effective stress response the organism’s survival would be in jeopardy. Cortisol also kicks into gear when other physiological responses go awry, helping to maintain homeostasis.

Cortisol is synthesized from cholesterol and secreted from the zona fasciculate of the adrenal cortex (Lee et al. 2015). This follows a complex chain of hormonal reactions and interactions, which starts in the brain. The hypothalamus secretes corticotropin-releasing hormone (CRH), which causes cells in the anterior pituitary to release adrenocorticotropin hormone (ACTH) into the vascular system. ACTH is transported to the adrenal cortex via the blood, where it increases low density lipoprotein receptors and cholesterol desmolase. Cholesterol is converted to pregnenolone, which is the precursor for cortisol and other glucocorticoids. The reaction is catalyzed by the hydroxylase enzyme CYP17A1. Further enzymatic reactions complete the conversion to cortisol.

CRH can be released in response to stress, intensive exercise, low blood glucose levels, and viral infections. Increased cortisol levels suppress the release of CRH and ACTH in a negative feedback loop that keeps all three in check (Winter et al. 2012). The hypothalamus-pituitary-adrenal (HPA) axis follows a circadian rhythm, giving cortisol a diurnal cycle with higher levels in the morning and lower levels in the evening (Thau et al. 2021).

The main downstream product of reversible cortisol metabolism is cortisone. This occurs via the 11-beta hydroxysteroid dehydrogenase system (11-beta HSD1 and 11-beta HSD2) (Tomlinson et al. 2004). Any cortisol and cortisone products that aren’t needed are broken down into tetrahydrometabolites in the liver, before being flushed out in urine (Stachowicz et al. 2016).

Exposure to stress triggers the “fight or flight” response, which begins in the amygdala. If the amygdala determines the threat level to be serious enough, it signals to the hypothalamus to activate the sympathetic nervous system. This prompts the adrenal glands to release a surge of epinephrine and cortisol. While one wouldn’t want to remain in this state for long, cortisol allows the body to remain on high alert and prepare to fend off danger, ensuring a quick release of energy to the parts of the body that need it (Thau et al. 2021).

In adipose tissue, cortisol increases lipolysis, releasing free fatty acids which provide energy to other cells. In the pancreas, cortisol decreases insulin levels and increases glucagon, which in turn promotes glycogenolysis, gluconeogenesis, and ketogenesis in the liver (Thau et al. 2021). In the brain, cortisol can affect appetite, mood, and pain perception. And cortisol supports the immune system by slowing the migration of white blood cells to inflamed sites and stimulating the body’s response to injury (Stachowicz et al. 2016).

Cortisol has been broadly accepted as a reliable biomarker of stress. According to the glucocorticoid cascade hypothesis, chronic exposure to stress causes consistently elevated cortisol levels, which do not return to baseline even when the source of stress abates (Lee et al. 2015).

Given the complex relationship between sociological and physiological causes and effects of stress, Roberts and McWade call for a new “cortisol sociology”, encouraging sociologists to engage with cortisol research to build a better understanding of the overlap and distinction between biological and social factors in stress-related disease (Roberts et al. 2021).

As with many metabolites, the dose makes the poison. For example, in diabetic patients with hypoglycemia, the right amount of cortisol can help bring blood sugar levels back to normal levels. On the other hand, cortisol is known to have diabetogenic effects, by inhibiting insulin secretion and signaling (Dallman et al. 1993).

A 2020 study found that cortisol is associated with higher blood glucose levels in people with type 2 diabetes (Dias et al. 2020). Cortisol’s diurnal cycle was also found to be less pronounced in people with higher glucose levels. In this study, body mass index did not appear to affect the results. However, other research has found that individuals with obesity may be less able to compensate for the long-term effects of cortisol and stress on insulin resistance, leading to hyperglycemia (Al-Goblan et al. 2014, Adam et al. 2010).

Cortisol’s relationship with weight gain is complicated. Some people may overeat in response to stress, while others may lose their appetite. Studies show that CRH is released following a stressful event, which suppresses the need to find food so that the individual can focus on addressing the threat (Sominsky et al. 2014). Once the threat has passed, the desire to eat and replace spent energy returns. Chronic stress interferes with the HPA axis to disrupt appetite and eating behavior. In this way, cortisol is linked to obesity, which brings a higher risk of metabolic syndrome, heart disease, and diabetes.

Cortisol and the immune system

Cortisol has been shown to reduce inflammation signaling, leading to the use of cortisone and other corticosteroids to treat inflammation in rheumatoid arthritis, osteoporosis, sciatica, and chronic joint and muscular pain.

Cortisol and other organs